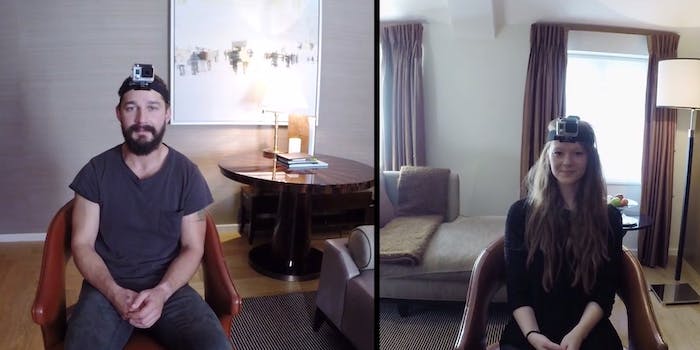 Shia LaBeouf says he was raped during #IAMSORRY performance

What started as an email correspondence became much more candid.

Shia LaBeouf claimed that he was raped by a woman during his #IAMSORRY performance art exhibit back in February in a new interview with Dazed.

He first contacted Dazed reporter Aimee Cliff back in September via email with the intent of starting a dialogue. He wrote that he liked Cliff’s “point of view” and was interested in meeting for an in-person interview.

In the course of the correspondence, LaBeouf revealed in one email detailing the kind of people who came to #IAMSORRY, the performance art exhibit he put on in Los Angeles for five days after he was accused of plagiarism, which he says was triggered by a “genuine existential crisis.”

Word of what happened during his exhibit reached LaBeouf’s girlfriend, who was in line to see him at the exhibit. He said that it occurred on Valentine’s Day.

“When she came in she asked for an explanation, and I couldn’t speak, so we both sat with this unexplained trauma silently,” he wrote. “It was painful.”

LaBeouf, who’s currently receiving treatment for addiction following a plea deal, also touched on some of the headlines he’s made recently and his reasoning behind withdrawing from public life.

LaBeouf and Cliff eventually agree to meet in-person, and while they candidly corresponded by email over the course of a couple weeks, they strapped GoPro cameras to their faces and sat across from each other in silence.