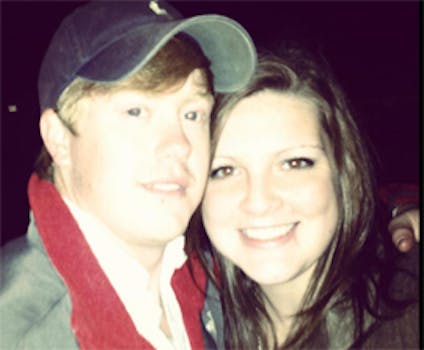 A Mississippi man who allegedly hit his girlfriend with a car briefly had his own Facebook fan page. It was pulled from the site after concerned Redditors reported it.

As a rural Mississippi town is rocked by what could be a horrific vehicular homicide, Redditors are taking to Facebook to protest a fan page supporting the alleged killer and defaming the victim.

WABG’s Tanya Carter reported via Facebook Sunday night that “Shelby Harmon was murdered Saturday morning after telling her boyfriend she was leaving him.”  The incident Carter referred to was a hit-and-run incident that has galvanized the community of Bolivar County, Miss. Residents of the small town of Cleveland say that shortly before her death, Harmon had fought with her boyfriend, Shelton Fulgham. Family members say she called them while walking down the road to get away from their house. Shortly afterward, Fulgham allegedly pursued her in his truck, hitting her and knocking her body into traffic, where it was hit several more times.

On Monday, details were still sketchy, with one network reporting that Fulgham had been detained only as “a person of interest,” while another reported that no arrests had been made. Late Monday evening, Carter reported via Facebook that the coroner had ruled the death a homicide: “MHP stated her boyfriend struck Shelby first with his vehicle causing her to be thrown onto highway 61 and hit by two motorists who did stop and called the sheriff’s department.”

Fulgham did call 911 and report the incident after leaving the scene, according to Bolivar County police. While the Mississippi Bureau of Investigation is looking into the case, no charges have been filed against Fulgham, who was previously arrested on burglary charges. But unconfirmed rumors that Fulgham not only had a history of domestic violence but told a friend he was going to kill Harmon have incensed a community already impatient for an arrest to be made.

The gruesome rumors circulating the internet about the death aren’t making things any easier. Now authorities have a new problem on their hands: Facebook.

Monday morning, a Facebook page called “Justice for Shelby” was created. Over 12,000 people have liked it, many of them outraged that Fulgham, who was briefly taken into custody for his own protection due to death threats, has now been released.

Perhaps in response to the enormity of outrage and tributes to Shelby that appear to be somewhat ill-judged, an answering Facebook page called “Shelton is Innocent!” popped up yesterday. Featuring images of a woman facing off against a car captioned “Shelby vs GT” and posts like “RIP my little speedbump,” the page billed its persona as “Psychic Kay Gallagher”—the name of a practicing psychic in New York with no connection to the case. 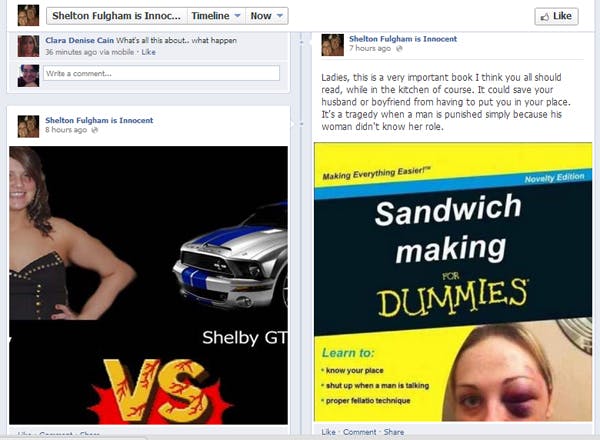 The page itself focused mostly on trolling visitors. At one point it linked to a disturbing satire called “Sandwich Making for Dummies,” featuring a picture of a battered woman on the cover. “It’s a tragedy when a man is punished simply because his woman didn’t know her role,” writes the anonymous owner of the account. The page also claimed to be accepting funds via an unannounced paypal for Shelton’s legal defense. “We have raised over $20,000!” it claimed.”

Whatever the intent of the page, it has unquestionably sparked outrage.  One redditor posted the link to /r/self, begging people to report it as a violation of Facebook’s content policies, which prohibit both hate speech and graphic violence.  The outcome was primarily a bunch of confused redditors trying to sort through the muddled facts of the case and arguing over whether the Facebook page was trolling; but some did report the page to Facebook. Just before press time,  the page was taken down.

Today is “Shelby Harmon Day” in the small town of Cleveland, Miss., as well as the day of funeral services for Harmon.