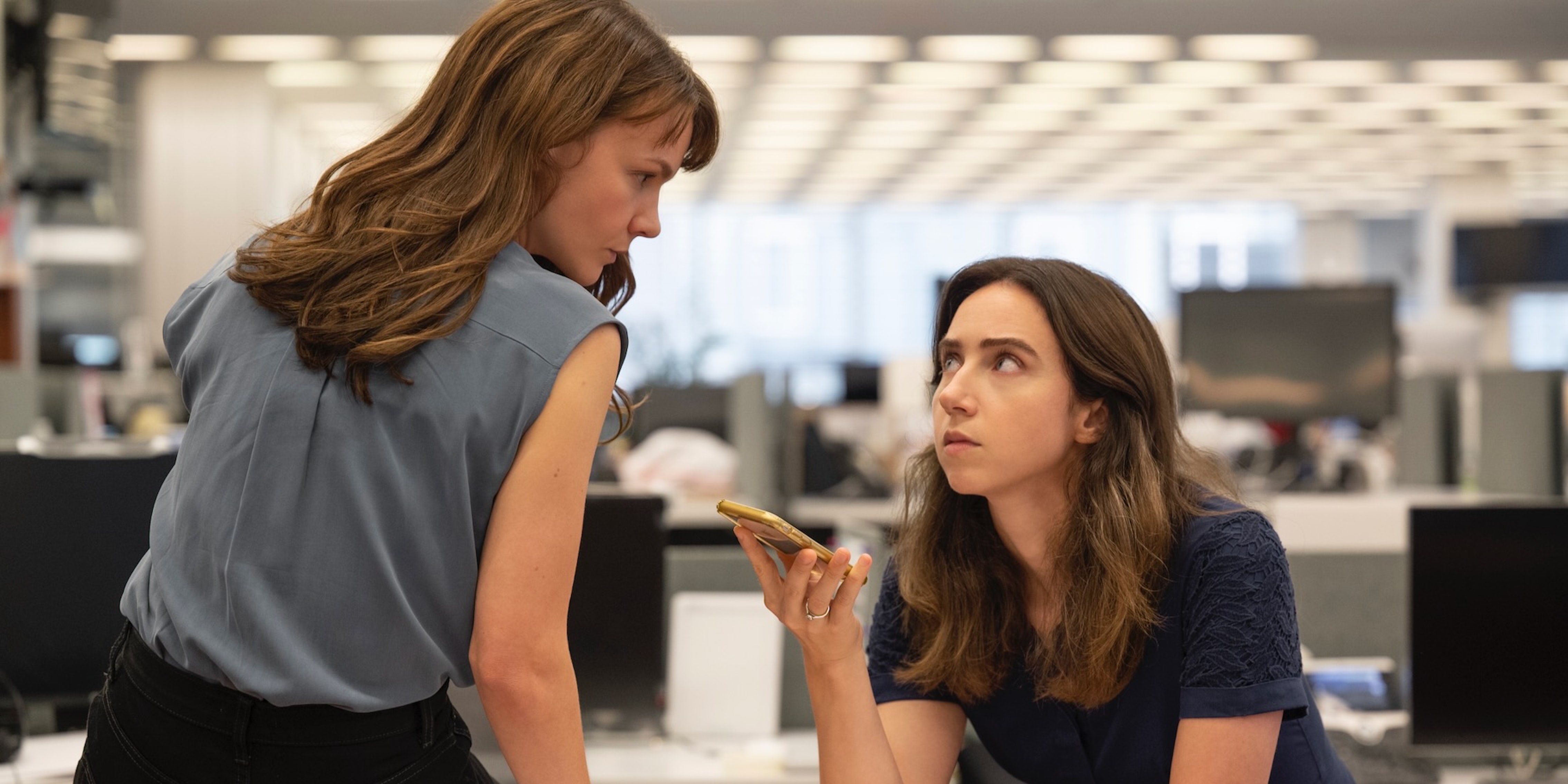 Carey Mulligan and Zoe Kazan star as the reporters at the center of the groundbreaking investigation.

At its heart, She Said—an adaptation of Jodi Kantor and Megan Twohey’s book chronicling their Pulitzer Prize-winning investigation into Harvey Weinstein for the New York Times—is an in-the-weeds journalism process movie. There are more than a few scenes dedicated to some of the more unglamorous aspects of reporting that Jodi Kantor (Zoe Kazan) and Megan Twohey (Carey Mulligan) go through in their investigation. We see phone calls to and from the reporters, talks of the emails they’ve sent, interviews around New York and out of the country, and even an occasional stakeout of a potential source’s home when they don’t respond to those repeated phone calls and emails, all of which results in a single article (and led to many, many more in the months and years to come).

The tension rises not just from the looming shadow of Harvey Weinstein, whose face you never see (he’s briefly shown from behind, but otherwise you only hear his voice), and the powerful figures shielded him from facing any consequences for decades. We might know how the story ends: Weinstein is currently serving a 23-year prison sentence, and as She Said premiered at the New York Film Festival, jury selection was underway for his Los Angeles trial which could result in Weinstein spending the rest of his life in prison. But that doesn’t take away the tension with the slow reveal of the details that form the first investigative piece on Weinstein, nor the collective relief when what we know happens plays out. But it also falls into familiar trappings with clunky dialogue and the impression that, even as the film plays out, it’s attempting to pat itself on the back even as many of the issues that Weinstein perpetuated still persevere in the same system that She Said was made.

While many attempts were made to report on Weinstein over the years, something that some of Megan and Jodi’s sources tell them, the genesis of She Said predates the investigation: In 2016, on the eve of the election, Megan wrote about Donald Trump and Bill O’Reilly’s sexual misconduct, work that resulted in being berated by both Trump and O’Reilly, her sources being hounded and harassed, and casual death and rape threats for Megan; in the case of O’Reilly, it took months for him to lose his show, and that’s only after dozens of advertisers pulled out. Those successes led Jodi to pitch the Weinstein story, and later on, get Megan to come on board.

And for much of She Said, the investigation’s unglamorous legwork is front and center; All the President’s Men is an obvious touchstone, but 2015’s Spotlight also comes to mind. More than once, someone calls Jodi and Megan late at night or early in the morning, or new developments in their investigation play out while they’re with their family—Jodi has two young daughters while Megan has her first child in the investigation’s early stages—but Rebecca Lenkiewicz’s script and director Maria Schrader both wisely avoid depicting some of the clichés you might expect when watching a working mother at the center of a movie juggle her all-consuming work life and her home life; their respective spouses are pretty supportive.

That support extends to the newsroom between the reassuring voice of New York Times editor Rebecca Corbett (Patricia Clarkson) and executive editor Dean Baquet (Andre Braugher), the latter who has dealt with Weinstein before and warns Jodi and Megan that they should assume every phone conversation they have from now on is being recorded. Knowing who they’re dealing with, they must be able to back up everything they write with evidence, and with the knowledge that Ronan Farrow was working on his own investigation, they needed to work as quickly as they could.

As She Said demonstrates succinctly, it’s a seemingly impossible uphill battle for so many of the reasons we’re now well aware of: Weinstein’s position in Hollywood, the fear that nobody would ever believe them, what he could do to anyone who spoke out, usage of settlements and NDAs to buy victims’ silence, and the worry by both sources and the reporters that nothing would change even after everything is out in the open.

Jodi and Megan’s process of getting their sources to trust them and tell them their story is long and grueling; their reporting styles complement each other’s, something that Kazan and Mulligan’s performances capture well. The catharsis comes with their victories, such as finally talking to former Miramax employees Zelda Perkins (Samantha Morton) and Laura Madden (Jennifer Ehle), or the reaction to learning that someone will go on the record, is palpable. But not all of the choices work: She Said temporarily feels more like a docudrama with one of the actors who spoke to Jodi and Megan playing herself. Other scenes can feel repetitive and a dry recreation versus an adaptation of a story to a different medium.

In some places, She Said leans into the importance of the story it tells, which sometimes comes off as self-congratulatory as many systems (including Hollywood) continue to protect men in power. In other places, the film is remarkably restrained. Apart from not showing Weinstein’s face, making his threats and attempts to placate the New York Times seem even more daunting, Schrader doesn’t depict any of the acts he committed against these women onscreen. In one instance, the camera lingers on Kazan’s face as she listens to the unseen woman on the other end describe what happened to her. In another, flashes of a hotel room’s state of disarray appear. And when the film plays the audio recording of Weinstein admitting he groped Italian model Ambra Battilana Gutierrez (who captured the confession while wearing a wire), the camera takes us up and down the halls of the hotels where many of these acts took place to keep all of your focus on what he’s saying.

For a story that Weinstein professed “sounds so good I want to buy the movie rights” (which we now know was part of a last-ditch effort to remove any last shred of cover Jodi and Megan’s investigation had before publication), She Said allows the work to speak for itself. But, like some of the other great journalism movies before it, that’s the thing that might stick with viewers: Even as Hollywood and so many institutions have a long way to go, here’s an instance where the reporting in and of itself mattered.

She Said will arrive in theaters on Nov. 18.