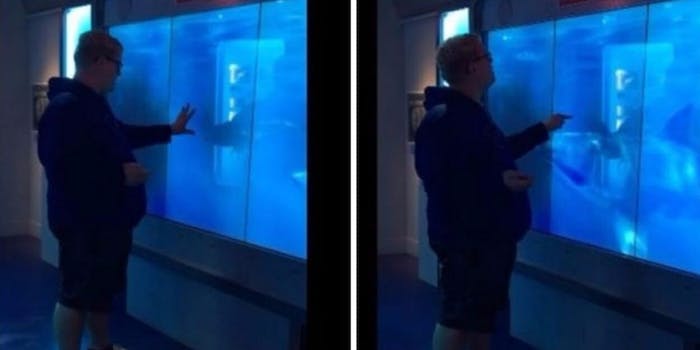 You know those signs next to the looking glass at zoos and aquariums that ask you not to tap or bang on the window because it might antagonize the animal that’s on the other side? Do you follow those orders and prevent yourself from annoying the bejesus out of the creature who’s just minding its own business?

Otherwise, somebody might play a terrifying trick on you.

Perhaps this person who was visiting the International Spy Museum in Washington should have expected something like this. After all, he was in a museum dedicated to spies who presumably played tricks on others. This was the virtual shark tank, so presumably, the person in the video below knows there’s not an actual shark behind the glass.

But he clearly wasn’t expecting this.

This also isn’t the first time somebody has been scared shitless by the imaginary (yet oh-so-lifelike) predator.

It’s a good prank and a good lesson to learn. Don’t mess with an animal in a cage or tank, because, if you do, they might end up embarrassing you in front of all your friends.