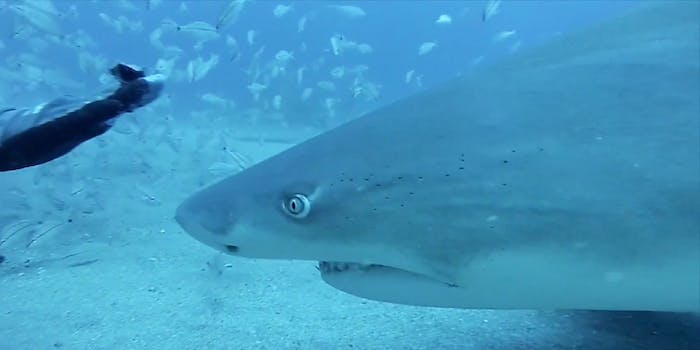 You're gonna need a bigger... camera?

Let’s face it: this week just sucks. Robin Williams and Lauren Bacall are no longer with us, Ferguson, Mo. currently resembles a surreal dystopia, and we still don’t have a Black Widow movie.

On the other hand, it’s Shark Week: a chance to relax, ease your cares, and commune with the kings of the sea. Let the soothing sounds of Shark Week wash over you: the flowing water. The two-ton predators gently gliding by. The hum of a GoPro.

More and more, GoPros have played a role in shark spottings across the globe, from the inadvertent to the oblivious, to the potentially staged encounters. So it’s no surprise that not long after two Floridians used one of the cameras to perform an amazing underwater rescue act, the company sent them right back underwater again.

Cameron Nimmo and Mickey Smith are hobbyist divers and underwater photographers who call themselves the Shark Addicts. Last week, they made a splash when they took a GoPro (and professional diver Randy Jordan) down with them to remove a nasty hook from the mouth of a silky shark. This week, they did it again—only this time, they had the main GoPro stage on YouTube, and a fleet of tiger sharks for company.

But enough about all that. You just want to watch these dudes pet a tiger shark. And you shall, friend. You shall.

In case it needs to be said: don’t try this at home.