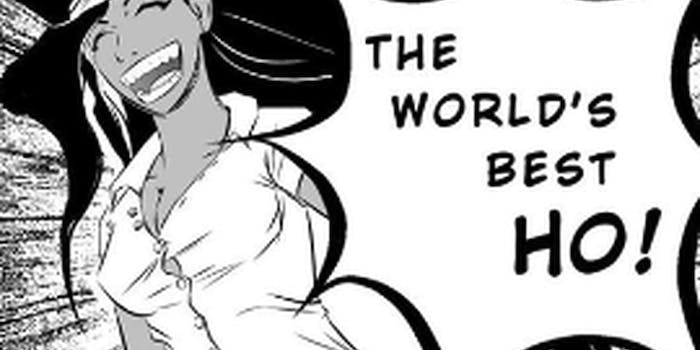 Racist Kickstarter comic shuts down after offending everyone

When a Kickstarter project is cancelled, it’s usually because it didn’t get funded—not because the creators realize that, in retrospect, their project was a very, very bad idea.

When a Kickstarter project is cancelled, it’s usually because it didn’t get funded—not because the creators realize that, in retrospect, their project was a very, very bad idea.

But that’s what happened this week when a group of manga fans decided to take on some of the common tropes in shounen manga—the Japanese term for adventure & sports comics marketed to boys—by applying them to some of America’s most common sexist, racist, and cultural stereotypes.

Not surprisingly, their pitch offended basically everyone.

The controversial comic, Shaniqua-no-Ho, starred a black woman with a “raging beast” inside of her. The supporting cast included “Big Lips Dorothy, the trailer park ho, and Pimpsferatu, not to mention Shaniqua’s primary antagonist, The Vice Squad, as well as the evil, drug-abusing Gold Diggers syndicate.” 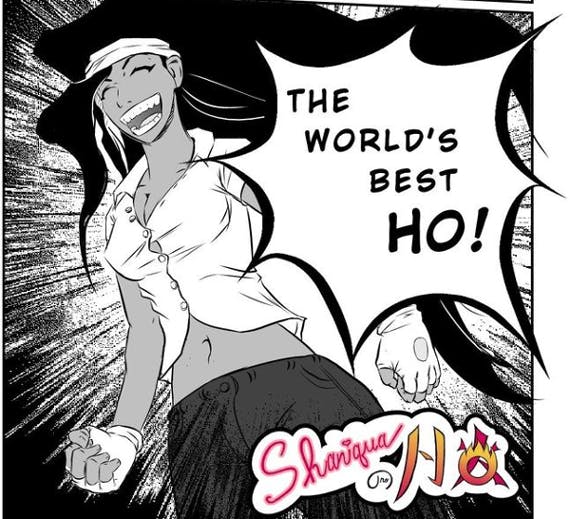 While creators Isaac Shapiro, Scott Ferguson, and Greg Lanzara, who formed the company Wacky Beast Productions, were excited about their take on manga cliches, many others…. weren’t.  The description of a vengeful black sex worker—a “ho,” as the creators put it—didn’t go over very well—at least judging by the creators’ subsequent abject apology and cancellation of the project.

“We were naive, privileged, and stupid,” Wacky Beast wrote in their final project update on March 21, when they announced they were suspending the project. “While we’re sure we would have eventually reached our goal, we realized, after deep reflection, that it wouldn’t have been right.”

Given that the project creators have been working on the comic since at least June of last year, they’ve had quite some time to come to the realization that, in their words, “we f*cked up.”

It’s hard to believe they didn’t expect at least some people to take offense at Shaniqua-no-Ho, though. This is the comic’s plot description:

A Ho in Shaniqua’s world are like an MMA fighter, Miss America, and Jedi master all rolled up into one. They defend the world from rampaging monsters that burst out of people’s pants. Of course, hos aren’t alone in the fight. They often work with pimps, men and women who form special bonds with their crotch monsters and command them in battle. Unfortunately being a ho or a pimp ain’t easy because they all have to deal with the Vice Squad, an army of fanatics sworn to wipe out crotch monsters, hos, and pimps.

Preview shots of the first issue featured Shaniqua holding up her victims’ bloody heads like Judith and Holofernes: 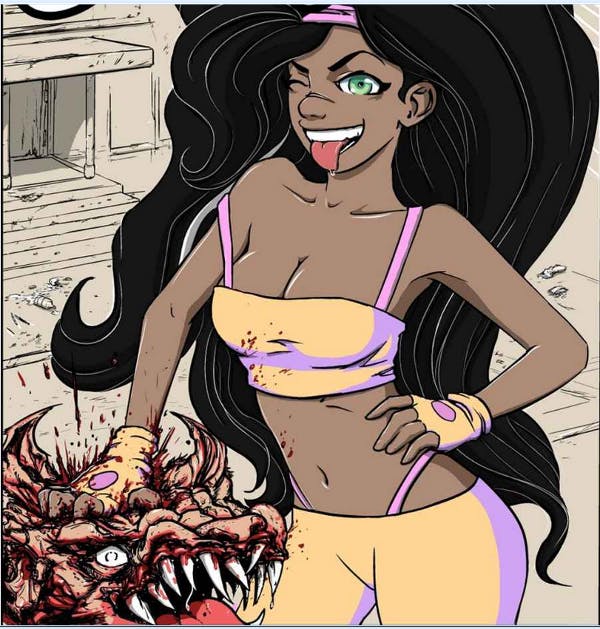 The project billed itself as an “action-packed love letter” to sports manga like Naruto, Dragonball Z, and others. Shounen manga tropes often feature a video game-like plot arc involving the boy hero growing stronger and stronger while facing off against a series of increasingly strong opponents. The broadness of the trope means that it can be applied to just about anything with a competitive aspect, a feature that Wacky Beast evidently decided to exploit for their comic.

The title Shaniqua-no-Ho is a pun on Hikaru no Go (“Hikaru’s Go”), in which the central game is a board game.  In Shaniqua, the “game” is evidently the exploitation of black sex workers.

Wacky Beast insisted they intended to subvert the racist tropes and make their characters strong women. “We wanted to make manga with an empowered, capable woman as the protagonist,” they wrote in their extended Kickstarter apology.

We wanted to make a comic that showed a brown skinned woman in a leading role like Luffy and Goku. We wanted to change the conversation about sex workers by making them respectable and powerful. We wanted to do it by parodying a genre we love very much. We thought we’d been careful with problematic elements in the script by asking women and sex workers for feedback while we were working. We were wrong.

Instead, they ran into the question of whether parodying a racist trope is still racist.

“Despite our efforts, we did not check privilege nearly enough when considering this project,” they wrote, “and we completely deserved the angry reactions it produced.”

The project wasn’t without its supporters—over 5,000 people had “liked” the comic’s Facebook page, and some even created fanart.