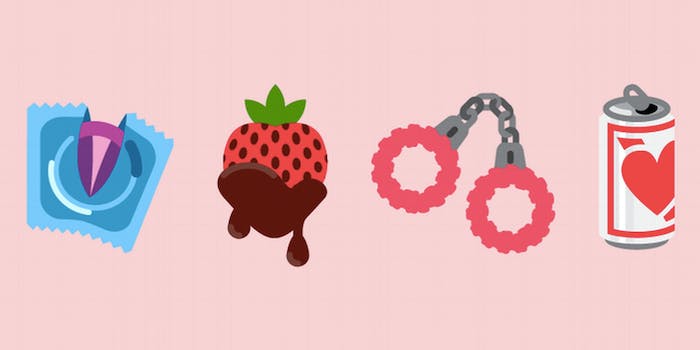 What your use of sex emoji says about you

Using emoji for sexting is nothing new, but here’s one way you can make flirting with emoji a little easier: by using these icons from Flirtmoji, the #sextpositive emoji site. But be careful with how you use them, or you could end up saying something you really don’t want to say.

Below, we’ve assembled a helpful emoji dictionary for these steamy icons.

Has intimacy issues, will likely “jokingly” suggest you get implants in front of your boss at a work function.

Idolizes Good Eats host Alton Brown; wants to “experiment” with food, a.k.a. give you a chronic yeast infection and then refuse to pay for your Monistat.

Claims he’s allergic to latex condoms, thinks ladies can’t get pregnant if they have sex upside down.

Secretly read mom’s copy of 50 Shades of Grey and had to Google Ben Wa balls. Gets off on recreating lame plot devices from ’90s sitcoms.

Hasn’t heard of the Tuck Method, will never not have pee stains on his boxers.

Has masturbated to the “Anaconda” video. Doesn’t actually understand this means “booty call.”

Bitch, just run. Run as fast as you can.