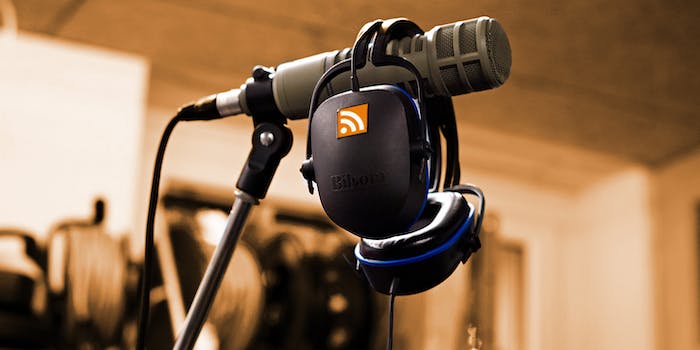 The streaming wars are coming to your favorite podcast

If you're confused about why Serial is streaming on Pandora, here's some answers.

The Internet’s favorite podcast has found a new partner in true crime. Serial, the spinoff of This American Life that captivated millions with its investigation of a 1999 murder case, announced earlier this week that episodes of the show—including Serial’s upcoming season—will be made available on music streaming service Pandora. The show will not be exclusive to Pandora: The official Serial Twitter account spent much of this week clarifying that the podcast would still be free and available just as it’s always been, but it does mark a unique milestone for both Pandora and the podcasting industry as a whole.

It’s surprising that something like this deal has not happened before. Although the last few years have seen major corporate bidding wars over the future of video, premium audio content like Serial has barely registered as a commodity. Services like iTunes and Stitcher may be the default apps for mobile users to listen to podcasts, but very little has been done to keep content exclusive or even encourage shows to appear on different services.

The same podcasts you can listen to for free on iTunes are available on pretty much any other app that can read RSS feeds and play audio. You don’t need a specific app to listen to Radiolab or Freakonomics, and no monthly cost will keep you from enjoying the Nerdist podcast the same way you consume Reply All. Though joined together by collectives and studios—like Panoply, Radiotopia, or Feral Audio—podcasts are independent agents free of loyalty or exclusivity.

Often podcasts don’t even need to be as grouped together as they are. One of the most popular podcasts in the world, WTF with Marc Maron, is completely owned by Maron himself and funded solely by sponsors (along with fees to listen to older episodes). Although WTF has been syndicated by different radio stations, Maron’s podcasting juggernaut is a self-made success; earlier this year, Maron even interviewed President Barack Obama.

The independence provided to creators through podcasting should stand in stark contrast to video. Hulu, Amazon, Netflix, and HBO are in a constant struggle for shows, movies, and customers—with most television networks joining the fray. As just one example, take this week’s news that CBS would be making a brand new Star Trek TV series—the first of its kind in more than a decade—but only for users of the network’s All Access service.

At $6 a month, that might seem like a bargain to any devoted Trekkie. But the whole online streaming setup, in which customers are paying for individual networks even if they only want a show or two from each, might become the very hassle it was supposed to free cord-cutters from. Imagine this scenario: You are subscribed to Netflix ($7.99/month), Amazon Prime ($99/year), HBO Now ($15/month) and YouTube Red ($10/month). Never mind that you might only watch one show from each service—you’re now shelling out over $40 for just four shows and still missing out on live events, all because of the content restrictions on video.

In my first draft of this piece, I wrote, “I’m subscribed to 44 shows.” Then I found out about Sports Illustrated podcasts coming to the Panoply network. I subscribed to two. 46. The next day, I realized I hadn’t counted In Our Time, a BBC podcast on summer hiatus (one of my favorite podcasts, actually). Up to 47. Then I discovered that MLB.com’s The Vault, a collection of radio broadcasts from classic games, had returned after a three-and-a-half year absence. Subscribed. 48.

Such a feat would be impossible if podcasts were subjected to the same content wars that have restricted online video. See the reaction to YouTube Red, the announced premium service that will allow subscribers to watch YouTube videos commercial-free, as well as gain access to exclusive content and channels. As many YouTubers have pointed out, “exclusive content” is a foreign concept to the free and unrestrained world of YouTube—and might very well increase the cost of entry for new YouTubers to achieve the fame of PewDiePie or Smosh. The more restrictions on the content, the less likely it is anyone can be a star.

Putting any kind of premium on the podcasting world would have a similar effect. Serial, though bolstered by its relationship with This American Life (and therefore the prodigious world of public radio), largely spread by word-of-mouth. As the Wall Street Journal noted when Serial began its rise to ubiquity, the show received little official promotion outside of NPR mentions but became the water-cooler talk of the nation, creating a million amateur sleuths in the process. It even spawned a spot-on SNL parody.

A world in which Serial would have been limited by the studio that produced it or the service that carried it means only well-funded broadcasts could earn any of the attention they deserve. While Triple-A content like Serial, Radiolab, or Comedy Bang Bang might find a following (buoyed by corporate sponsors and celebrity endorsements), niche shows like Love + Radio or Welcome to Night Vale would suffer.

Unlike YouTube Red, Pandora does not appear to be fueling the gatekeeper model: Serial’s second season (which is rumored to be about Sgt. Bowe Bergdahl) will be as available to you as its first. In addition, Spotify or iTunes has yet to hint at exclusive and original content. We are likely still a long way from paying for podcasts like you might TV series or films. But as the industry grows more lucrative, podcast lovers everywhere should be on the lookout for changes in this untethered world of entertaining and informative content.