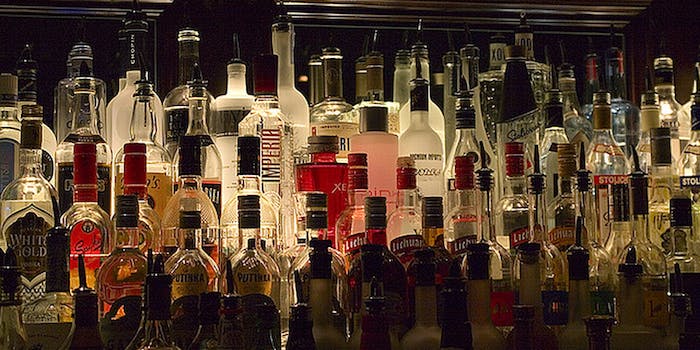 We're not talking about getting in touch with your ex as the Smirnoff runs out.

You can now text message via vodka, and we’re not talking about getting in touch with your ex as the Smirnoff runs out.

This is, thankfully, less embarrassing.

Scientists at Canada’s York University and the U.K.’s University of Warwick have managed to produce intelligible messages from vodka fumes, which is more than anyone standing outside the Roxy at closing time has accomplished.

The emitting device, which looks something like a sophisticated bathroom spray cleanser, translates alphabetic inputs (i.e., text messages) into a series of puffs of vodka vapor. The methodology is simple enough: The sensor detects greater or lesser concentration of evaporated vodka, so a heavy blast is a ONE and a pause is a ZERO. It’s alcoholic binary, basically. The same concept has a more sophisticated physical expression in the Indonesian fabric art of ikat, where groups of threads are tie-dyed before weaving and, when put together in a textile, form a pattern.

Or, less elegantly, it’s comparable to the habit of wild animals leaving their scat for others to find and interpret. As the chief researcher charmingly points out in the video.

Andrew Eckford, professor at the Lassonde School of Engineering, explains, “One way in which you could think of this system working is, for example, one robot could leave a message for another one. The first robot could drive along and leave behind it a pattern of chemical dots if you like. The second robot comes along and drives over that same strip and reads the dots.” Like sniffing fire hydrants, but geekier.

According to Consumerist.com, you can buy the devices used in the test at any electronics store for about a hundred bucks. “This wouldn’t even have to be a sophisticated piece of equipment.”