The 11 worst lines from this awful self-published Tinder memoir

If even half this stuff really happened, we don't want to go on living.

At the risk of drumming up publicity for his sub–Tucker Max garbage book, we need to talk about Hunter J. Pennington. That’s not his real name, but a pseudonym under which he pens (get it?) mostly fabricated tales of Tinder conquests, collected in the hideous and obviously self-published sex memoir Balls Deep: Confessions of the Tinder Swindler.

BroBible has a pretty great post detailing the fallout from Pennington’s decision to group-text all the women featured in the book, which came out in December. They basically call him a too-short, small-dicked, pot-addled, college-flunking spoiled brat with a weird O-face who didn’t bone half the people he says he did—but what of his outsider literary masterwork?

We thought it important to judge such art on its own merits, and after some close analysis, we can report that it is very, awfully, extremely bad. 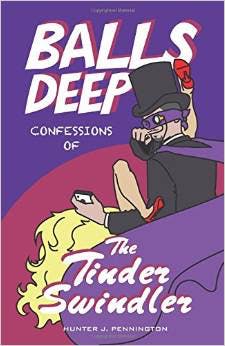 Let’s highlight some of the worst cringers, shall we?

Let me start off my memoir by saying all of my stories are true.

Pretty sure this opening is plagiarized from James Frey.

A Swindler has to thoroughly invest in the puppy pic. If executed precisely, the puppy picture allows pussy stock to soar. What I mean by that is this: You, the reader, are currently sitting here with a thumb up your ass reading my book, hoping to swim along and be a remora sucking up the parasites from this Swindler Shark; so I’ll throw out some chum nuggets of knowledge.

After reading these stomach-turning metaphors, I’m giving serious thought to going blind. Also, I rarely read books with my thumb up my ass—makes turning the page a bit of a hassle.

See, this is an art, the art of making sluts who you have never met feel bad for not hanging out with you; I will deliberate on this subject later.

This dude’s a one-man jury, folks! But why make us wait? DELIBERATE RIGHT NOW.

For me, when a girl is an 8.5 and over, you need to impress her as she has a billion other Tinder matches, and no doubt, has hundreds of back up dicks to fall on.

Stunning imagery. Pairs nicely with the song “Fields of Dick.”

If by now you haven’t gathered that I just do not give a fuck, good job!

Knew all that reading comprehension SAT prep would pay off one day.

“Yo, Gustavo, my bed is getting delivered, we gotta go,” I said as I grabbed my Kettle One.

You know life is sweet when you can’t be bothered to spell the name of your overpriced vodka correctly.

File this under “T,” for “Things That Absolutely Never Happened.”

So, I pulled my pants off, rubbered up and delved into the first warm crevice known as the vagina of my life.

If you try to parse this syntax the way he intended it, you will wake up in a padded cell.

I sent a picture which I thought would make her want to suck my dick in the next 2 hours and held my breath. This was the most nerve racking four minutes of my life, this bitch was getting sodomized by Kanye, the lyrical genius, and I expected to have sex with her with a sending out a pouty face selfie, high hopes, I had I must say. This is the type of girl who Kanye would write Gold Digger about as she sucked his dick.

That’s lyrical genius for you.

Conveniently, her slut fucking ass felon lived next to my hometown, so we had that in common.

Talk about a missed opportunity—she could have copyedited the book!