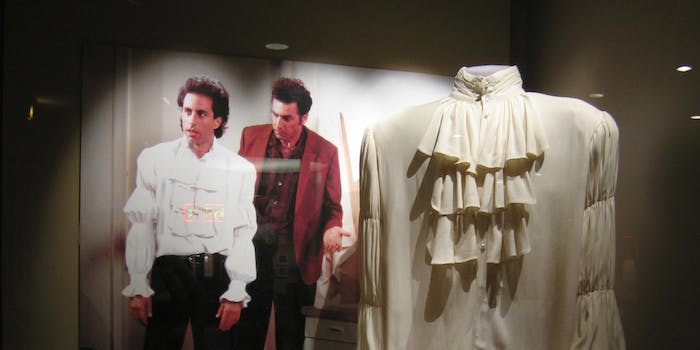 In which marble ryes are shot out of a T-shirt gun.

In a perfect world on Puffy Shirt Jersey Night, Newman would be barreling down the ice on a breakaway only to be stopped cold by Jerry Seinfeld in goal on a tremendous kick save.

In a not-so-perfect world, the host Bakersfield Condors, adorned in uniforms that paid tribute to the iconic sitcom, Seinfeld, lost in overtime to the Idaho Steelheads, 2-1. No matter the end result, the night was a blast. Something akin to successfully pulling a golf ball from the blowhole of a giant whale.

What is truly amazing is how the play-by-play announcers were able to seamlessly weave in the show’s character names with the names of the Condors players. I’d like to see Bob Costas in his prime pull that one off. The cherry on the icing was a between-the-periods promotion where, instead of shooting pucks for prizes into an empty net, a lucky fan tried to shoot a marble rye into goal for fabulous cash and prizes. In the locker room, Rusty the flatulating horse, was gorging on Pepto Bismol.

Folks on Twitter echoed the fun of one of sports’ most creative promo ideas in recent history.

Seinfeld Puffy Shirt/Jersey Night by the Bakersfield @Condors: classic. They are one team that never fails with their promotional nights.