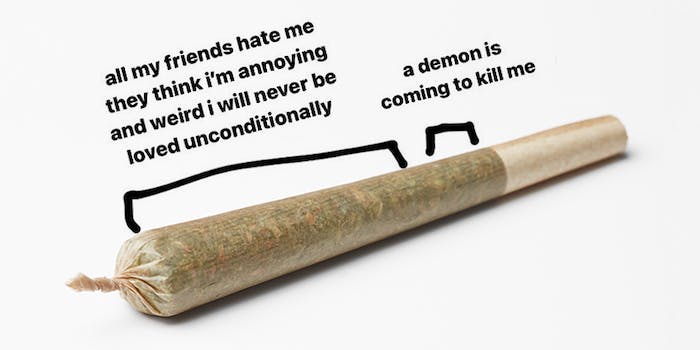 This meme perfectly illustrates different levels of a joint hitting

You know when the next bracket hits.

At a certain point, no matter what you’re doing, watching, or reading, things tend to ramp up to another level. And what better way to convey that than the progress of a joint?

The origins of a new meme, which labels the different sections of a marijuana joint, predate this year’s 4/20. In its original iteration from @jzux, who used a photo that appears to have been grabbed from a cannabis website, it depicts the levels of potential paranoia that come from smoking a joint, one that goes from fears that nobody likes them all the way to fears of being killed by a demon.

But it became far from the only depiction that illustrated the various stages of smoking a joint. Just by using brackets, people found a way to convey the different stages of anxiety, paranoia, and shower thoughts that might come to mind.

But like many memes, the sections of a joint evolved so that it no longer needed the joint to convey the various iterations and stages of an entity. And now, all we need are some brackets.

Like to relay the two very different moods to watching the second season of Fleabag.

SparkNotes’ Twitter put the brackets onto Victor Hugo’s very long Les Misérables and detailed just how much it strays from the original plot (although it’s definitely an interesting way to illustrate the actual reading progress).

It works just as well on capturing the various emotional stages of Phantom of the Opera.

Not to mention that you can apply it to the world’s saddest six-word story.

And given the latest resurgence of School of Rock on Twitter, this particular iteration of the meme feels incredibly fitting right now.

While some people might not be able to relate to the different stages of being high, most of us know just what it means when that bracket shows something is ramped up to a whole new level.