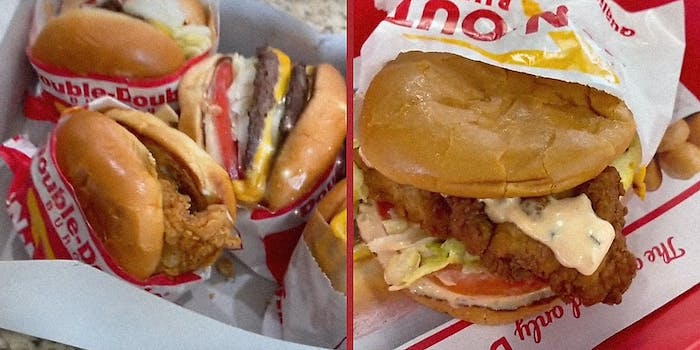 A pair of viral TikToks have hungry people wondering if burger chain In-N-Out really has a secret chicken sandwich on its famous, decidedly not-top-secret “secret menu,” throwing their hat into the ongoing chicken sandwich war.

In-N-Out hasn’t made any public announcement for a chicken sandwich. It appears at least two people have successfully ordered and received a sandwich, but In-N-Out aficionados remain dubious.

The first video, posted by @andynot2021, shows him recording himself at the counter.

“Can I order from the secret menu? Can I get a chicken sandwich?” he asked. Then, he suddenly seemingly receives a sandwich with what appears to be In-N-Out’s secret sauce, though the packaging is lacking.

When challenged, @andynot2021 claimed the chicken sandwich is “new, and it’s only for a limited time.”

But alleged current and former employees are calling cap. One commenter says the sandwich’s presentation is incorrect: “Not wrapped in the paper and the outside pouch is mangle from u switching. Lettuce isn’t wedged either. Totally transferred from burger.”

However, another user showed a similar sandwich, called a “chicken burger.” It appears more legit but doesn’t have any sauce.

Many people came back into the comments after having gone to an In-N-Out location, only to have the employees tell them they didn’t sell a chicken sandwich.

Another, @mothermoon_13, wrote, “This is a lie!!! I called the corporate [office], and it isn’t true. [People are using] Popeyes chicken and putting it in In-N-Out burger [packaging].”

One commenter, an apparent employee, said, “STOP TROLLING US!!! Literally got 3 of y’all asking for it today.”

“The social media videos featuring a chicken sandwich or chicken burger at out restaurants are not accurate,” states Kathleen Luppi, In-N-Out marketing communications specialist, via e-mail. “The videos were likely created as a prank, or to attract online attention.”