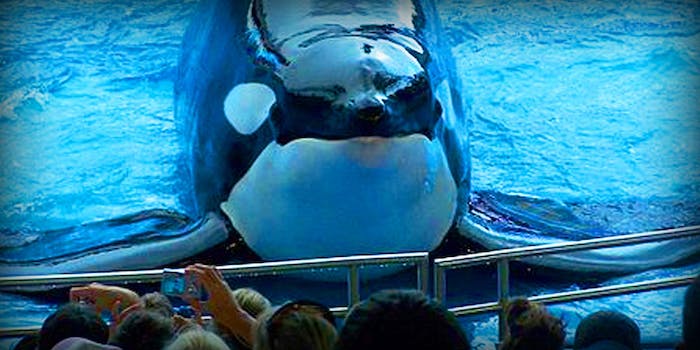 From vote-rigging accusations to Rose Bowl protests, the park is in the spotlight for all the wrong reasons.

The Orlando Business Journal noticed something fishy when they went to tally the results of a poll Thursday afternoon. The news site had asked their readers, “Has CNN’s ‘Blackfish’ documentary changed your perception of SeaWorld?” According to the poll, 99 percent of respondents claimed it had not.

Puzzled by the overwhelming support for the marine mammal park in light of the recent negativity directed at SeaWorld, one reporter decided to dig into the results. As it turned out, more than half of the responses to the poll originated from a single IP address.

“And who’s the owner of the domain name and company that address belong to?” the journal asked. “SeaWorld.com and SeaWorld Parks & Entertainment.” Of course.

“Our team members have strong feelings about their park and company, and we encourage them to make their opinions known,” a spokesman reportedly said in response to the accusations. “Each of those votes that came from SeaWorld were cast by a team member who is passionate about who we are and what we do.”

Ironically, Orlando Business Journal noted, even if all of the votes seemingly cast by SeaWorld were removed, the poll would have still gone in their favor. As one commenter noted, “This is SeaWorld’s home turf. So there is every incentive for us fans, supporters, etc to support our home team.”

Obviously, it would have been advantageous of SeaWorld to simply wait and see if they risked losing the poll before (allegedly) deciding to rig the results.

SeaWorld, as Twitter knows, has been on the defensive since the release of Blackfish, which turned the image of the company’s aquatic park from a fun-loving family outing to something more akin to an animal concentration camp. Animal activist groups from Sea Shepherd to PETA have used the momentum generated by Blackfish as a call to action, and the response has been formidable. Naturally, there are celebrities who have joined the anti-SeaWorld crusade as well.

Just one day before the vote-rigging accusations, SeaWorld suffered a separate, yet equally awkward, public relations backfire. While the company participated in the Rose Parade, it appeared as if a squad of armed police were needed to guard their float. Photos circulated online of officers walking aside the proportionally challenged reef-like vehicle, while several tactically dressed officers wearing olive drab bullet proof vests lagged behind. In one photo, an officer appeared to be strapped with an automatic rifle.

Although the sight of heavily armed SWAT teams is typical at most large public functions nowadays, Rose Parade organizers may have been expecting trouble. Nineteen protesters were arrested after stepping in front of the SeaWorld float, including a 12-year-old girl.

It’s difficult to say whether the impact of Blackfish will ever force SeaWorld to change its policy of keeping sea life in captivity, but children’s arrests and rigged online polls probably won’t do much to sway public support in SeaWorld’s favor. But there’s nothing that tickles the Internet’s fancy more than a good public relations disaster, and SeaWorld is definitely on a roll.