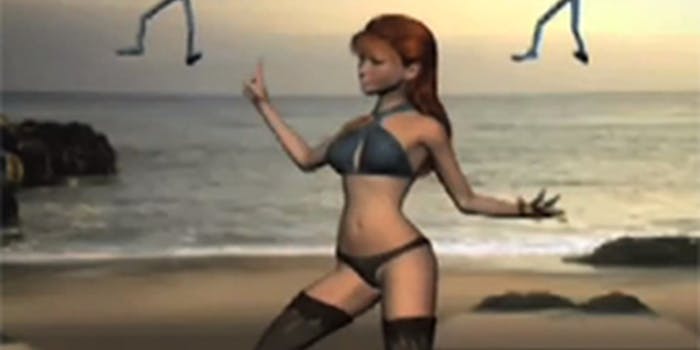 Why Rihanna’s “seapunk” is about more than just dolphins

The underground movement has gained attention online, with mixed reactions.

Rihanna’s performance on this week’s Saturday Night Live set everyone talking—and for once, it wasn’t about her singing or Chris Brown. Instead, the iconic performer joined rapper Azealia Banks in coming under fire for tapping into an online digital artist scene known as seapunk.

The artist’s performance of her latest single, “Diamonds,” featured smooth, lush vocals and even cooler teal-washed images of earth, sea, and sky that looked as if they had originated as spinning gifs on an ancient Geocities website. It’s all part of the seapunk aesthetic—and since Rihanna and Azealia have latched on, many musicians are questioning whether underground musical movements can ever take place on the Internet.

Though its joke origins are clear, seapunk can be read as a subversive take on similar X-punk movements within sci-fi/fantasy communities; like steampunk and stitchpunk, it fixates on a historical cultural aesthetic and merges it into a futuristic world full of overwrought grandeur—if you consider bleeding colors and memeified clip art grand. And there are deliberate cyberpunk elements involved, like the emphasis on computer-generated technology, pixellated everything, and the endless flow of images like data across the screen. It’s as if Max Headroom got stuck in your playlist, and now the only way out is through the music, often a chillaxed electronica dance beat that surfs its way across the ocean of your brain.

When Banks, no stranger to accusations of stealing from Tumblr musicians, tapped into the style for her summer album Fantasea and dropped her single “Atlantis” the day after Rihanna performed “Diamonds,” seapunk looked like the Lisa Frank Trapper Keeper you had when you were in third grade come to life: 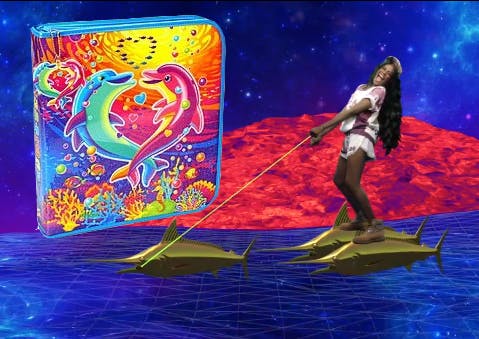 Here’s how it looked when Rihanna did it:

And here’s the sharper, more deliberately parodic brand of seapunk being put out by artists within the community, like JeromeLOL and the LOL Boys:

Seapunk began as an accidental Internet meme when mix artist and producer @LILINTERNET tweeted about a dream he had:

@LILINTERNET wakes up from a dream at 5am, tweets about a “seapunk” leather jacket encrusted with barnacles instead of studs (Fig. 1), and goes back to sleep. He tells @LILGOVERNMENT, who hashtags #seapunk for the first time (Fig. 2). Lil Internet and Lil Government just want to escape to the beach (Fig. 3)…and a meme is born.

@LILINTERNET and @LILGOVERNMENT ran with the joke, which circulated among a small community of mix artists as they began to explore what kind of aesthetic the new audiovisual meme should have. The movement spread slowly through Twitter and the musical community of Tumblr, where it generated an endless stream of dolphins, unicorns, and pink-and-teal memes.

Cluster magazine, writing about seapunk a year ago, pointed out that the online origins—specifically the Twitter and Tumblr origins—are a crucial part of the seapunk aesthetic:

“Post-ironic and consciously teen-oriented, seapunk’s ocean is a hungry tumblrsphere reveling in the retro-futurism of the 1990s. … More than regurgitated future-of-the-past, seapunk’s champions catalogue, assemble, and take the above source material to its extreme saturation point with almost spiritual fervor.”

But ironically, this DIY underground movement may have been hoisted on its own petard: the same factors that gave rise to the community that created seapunk are also the same factors that led to its being publicly known and widespread, until it hit the inevitable popularity surge and jumped the shark.

In his comments to Vice on the mainstreaming of the genre, @LILGOVERNMENT spoke to the influx of musicians who dyed their hair green, packaged, and sold seapunk online and off through Coral Records and other companies. “Even Gaga’s hair is conspicuously turquoise,” he wrote.

He spoke of splintering within the original collective of seapunk artists: “What was once a free-flowing exchange of quips, ideas, and imagery in the Seapunk secret group turns to squabbles about what ‘is’ and ‘isn’t’ seapunk.” In turn, one of the people he felt had taken the movement too far outside of its original jokester status, Zombelle, called Rihanna and Azealia “swaggerjackers.”

But beyond questions of who is stealing the art from whom, larger questions about what it means to produce “underground” art within the very public arenas of Twitter and Tumblr began to emerge.

“[S]eems pretty clear the internet is not a suitable place for any diy or underground thing to exist or happen,” agreed artist Jacques Greene.

But others were skeptical. “Reappropriate from pop culture’s past and then pop culture reappropriates it from you,” countered a tweet from members of the indie band Neon Indian. “Isn’t that how it works?”

It seems likely that the future of seapunk isn’t just about the movement existing on a dividing line of underground vs mainstream, real life vs. Internet, but rather that seapunk and movements like it will continue to bring the two extremes closer together. Seapunk participant Sophie Wiener, musician, blogger, and member of Bottle Rockets Productions, posted to Tumblr about how she felt the movement was a part of several different Internet-sprung artistic memes which were all converging in important ways:

This is the future, or part of it…. This last year has been the first time I’ve felt a glimmer of newness in culture since I began caring about it. Yes, there is a lot of recombining of older ideas (rave, new age, ball culture, drag, 90’s nostalgia), but I think what is emerging can be argued to transcend its influences. I think, I hope, it’s helping to open people up to exploring and examining the virtual world we now spend so much of our time inhabiting, and the fluidity and range of human experiences that can exist within and without it.