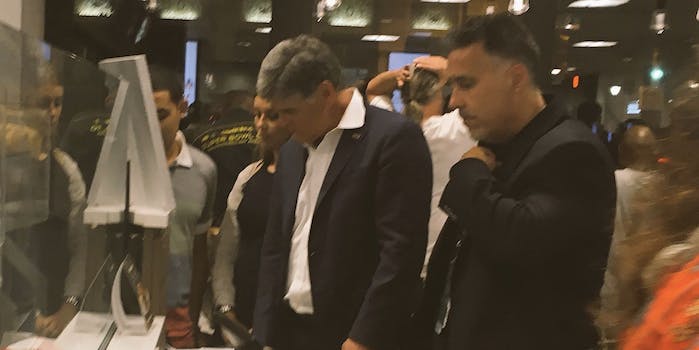 Did Sean Hannity really get booed out of a Philly Wawa?

The story is already local legend.

According to multiple local reports and tweets, Hannity was booed out of the joint. But according to Hannity, it never happened.

Most authentic Philly moment of the #DNC2016, Apparently Sean Hannity showed up at the Wawa on Walnut Street, and was booed out of the store

TWITTER: unsourced claim Hannity was rude @ WaWa
HANNITY: Didn't happen, but if it did my bodyguards scared the libs pic.twitter.com/r0bZX1f3a8

Who to believe? Let’s start with what both sides can agree upon: Hannity was at a Wawa.

And according to witness Matt McDermott, Hannity appeared flummoxed by the store’s famous sandwich ordering screens, which—as any Philly resident will tell you—you must use or your sandwich will not be made.

But that’s where the chain of evidence stops. McDermott tweeted that he left the store shortly after Hannity arrived:

Alas, nothing I can add to this amusing @seanhannity Wawa story! I got my panini and dashed after he walked in. I shall let rumors mill…

So the only thorough account we have of what happened comes from satirist E. Mo Black, whose story is high entertainment but, I must stress, completely made up.

Look, even though it’s probably not true, this is the kind of legend Philly builds its reputation on. And the tale just keeps getting taller as it spreads. Plenty of folks on Twitter are riffing on that theme today:

Yo I just heard Hannity cut in line at Wawa for a cheesesteak, got beat up by a Teamster and ran out under a hail of Krimpets & D batteries

Heard a rumor that Sean Hannity walked into the center city Wawa today and everyone threw Tastykake snowballs at him. Love this city!

The Walnut Street Wawa couldn’t be reached for comment after multiple attempts—they’re likely too busy serving the flood of DNC delegates. We’ll update the story if we hear back from them.