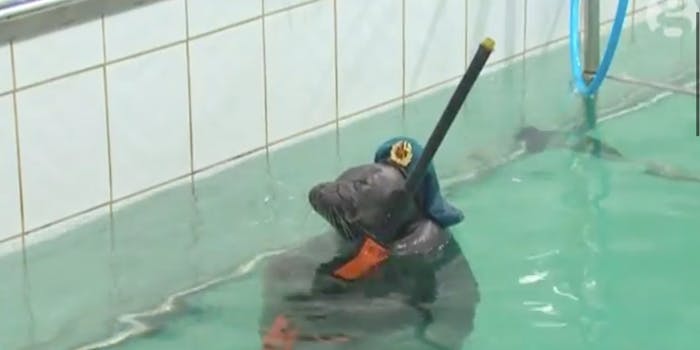 It gives new meaning to the term 'Navy Seal.'

A pair of seals in Irkutsk, Russia, were given toy rifles and dressed in military hats as part of a themed show marking the anniversary of Russian victory in World War II. Thanks to the Internet, everyone can see this both adorable and slightly disturbing display.

The video of the seals is full of delightful tidbits like, “the most difficult part of training was getting the seals to accept wearings hats” and an onlooker explained  that she “liked how skillfully the seals were holding the rifles with their flippers.”

The seals did more than just twirl and hold the guns, though: They also shot water pistols through targets. It may seem like fun and games now, but when Russia’s highly trained Siberian seal army begins world domination, don’t say you weren’t warned.

H/T BroBible | Screengrab via The Guardian