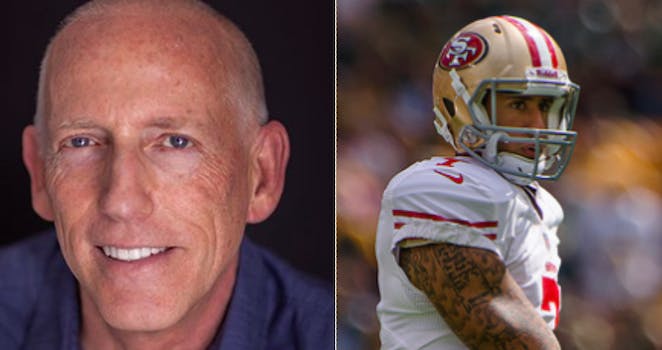 Dilbert creator Scott Adams is infamous for his controversial opinions and his belief that he is a genius. Twitter has proven to be an ideal medium for Adams to seek attention. He won a new fanbase among Donald Trump supporters after declaring Trump a “master persuader” and correctly predicting Trump would win the 2016 presidential contest, and he’s maintained his base by regularly making bad tweets since. Over the weekend, he tweeted that NFL teams whose players knelt in protest during the national anthem would “generally” lose to “standing teams” because kneeling is “submissive.”

Adams has been fascinated, in the past couple of years, with the psychology of persuasion in the “post-fact” society that Trump represents, and he’s put it to work with troll tweets like this. He’s good at picking polarizing issues, like the NFL anthem protests, to rile up his opponents. Meanwhile, his appeal to “body chemistry” appeals to the supporters who think Adams actually knows what he’s talking about.

Does he, though? Acknowledging that the question of who wins or loses at football has nothing to do with the point of the protests, and that there haven’t been enough games played by so-called “kneeling teams” to draw a conclusion, let’s take a look at how Adams’ prediction held up this weekend.

In short, it didn’t.

The teams with kneeling players this week (according to Sports Illustrated) were the San Francisco 49ers, the New Orleans Saints, the Seattle Seahawks, and the Pittsburgh Steelers.

The Saints, who have knelt together for three straight games, defeated the Green Bay Packers, who stood and linked arms during “The Star-Spangled Banner.”

The Seahawks, who had eight players (including the entire defensive line) kneeling, beat the New York Giants, who had one player kneeling while the rest of the team stood and linked arms. Notably, that kneeling Seahawks defense held the Giants to just seven points.

The Steelers, who had several players taking a knee in the end zone during the anthem, defeated the Cincinnati Bengals, who didn’t kneel.

The 49ers, the team quarterback Colin Kaepernick played for when he started the protests, continue to have several kneeling players. They lost to the Dallas Cowboys, who had no players kneeling. Cowboys owner Jerry Jones has said players should be punished for choosing not to stand during the anthem.

The thing is, though, Adams’ proposition is a mere troll. Even if the handful of players who kneel were somehow subject to “submissive brain chemistry,” there are so few of them that it’s unlikely to make a difference. Does anyone (even Scott Adams) truly believe that the 49ers, who haven’t won a game all season, lost to the playoff-contending Cowboys because some of them knelt briefly before kickoff? Probably not.

Adams is just using his favorite technique, the post-factual art of riling up “irrational” human beings. There’s not a rational scientific argument or one grounded in the realities of football, that supports his tweet, but it sure does a good job capitalizing on the strong feelings around the national anthem issue.