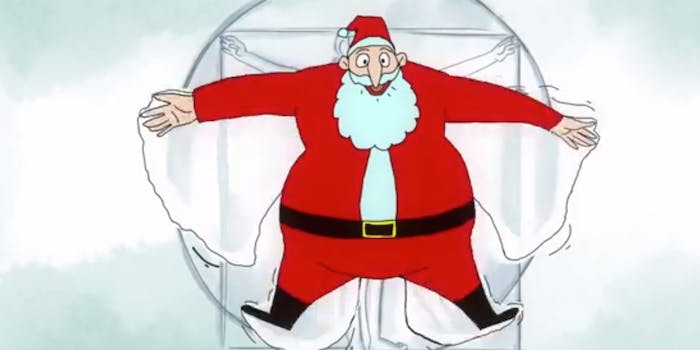 This ‘Scientifically Accurate Santa’ will spoil your Christmas, and you’ll like it

You’ll learn a lot by watching this video. You may even learn that you’d rather spend Dec. 25 doing something else.

Hey there, kiddo. Excited for Christmas? For Santa to come sweeping down your chimney with all those toys and gifts and Christmas mirth and cheer?

Did you know it’s all a ruse? That play’s impossible. If he was a jolly bro from the snowy North Pole who’d charged himself with delivering more than 300,000 tons of toys to upwards of 91 million children worldwide, he’d have to travel 3,000 times the speed of sound—and spend 1/1,000th of a second at every house he sees—just to make it around the world in one fell Christmas swoop.

Plus, he’d burn up and drop those toys down in what would quickly evolve into some sort of Sri Lankan-manufactured meteor crater, the type to wreak havoc on all your Christmas dreams. Is that what you want?

That’s at least the scenario being set up by the mad geniuses at Animation Domination High-Def, who’ve concocted this “Scientifically Accurate Santa Claus” story to point out just how many loopholes exist in this mad manifestation of Christian celebration that we’ve created for the sake of our economy.

Oh yeah, there’s also no such thing as elves.

You’ll learn a lot by watching this video. You may even learn that you’d rather spend Dec. 25 doing something else.