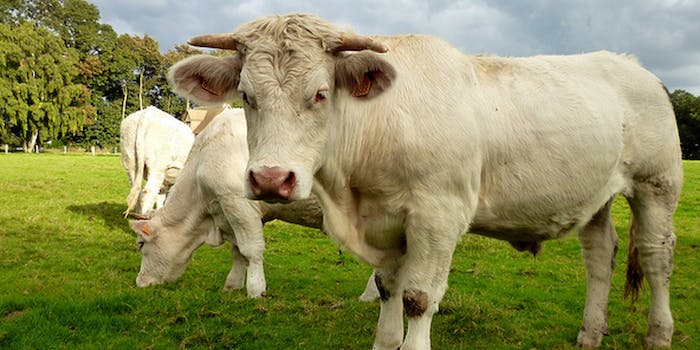 A ‘gay’ bull is about to be slaughtered unless you #SaveBenjy

With a little luck, Benjy the bull will get a new home instead of the axe.

A U.K. animal sanctuary, an Irish animal rights group, and media site TheGayUK have teamed up to save Benjy, a pedigree Charolais bull who may go the slaughterhouse because he prefers other bulls to cows.

The Irish Daily Mail reported last week that a farmer who had bought Benjy for breeding purposes was dismayed to discover the bull wasn’t interested. The farmer planned to “keep him for the factory,” as Benjy was “too old to castrate.” He had already bought a replacement bull and needed to be rid of him. “At first I didn’t take seriously that the bull could be gay, but after seeking advice I know this can happen,” he added.

In response to the story, TheGayUK collaborated with Ireland’s Animal Rights Action Network to spearhead #SaveBenjy, a Twitter-fueled £5,000 fundraiser to buy the bull from his owner and guarantee him a full life at Hillside Animal Sanctuary in Norwich, U.K. The organizers say they raised the first £1,000 in just 24 hours.

With 27 days to go, the crowdfunding effort has pulled £1,745, so if you want perks like a certificate of involvement in the rescue, a commemorative pen, or a photo of Benjy in his new home, you’d better donate soon. Meanwhile, Benjy’s going to play the field.