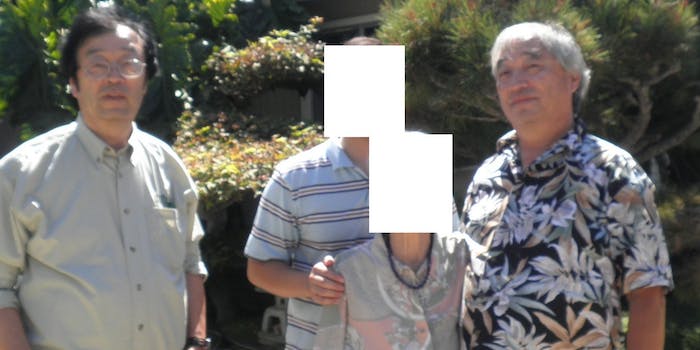 Life has not been too shiny for the Nakamoto family.

Since you couldn’t get enough of the saga of Dorian S. Nakamoto, who Newsweek claimed is Bitcoin founder Satoshi Nakamoto: Two of his relatives have joined Reddit to talk about him.

First, a disclaimer: It’s not infrequent for people to game Reddit for the hell of it. And the Nakamoto saga is so mysterious, the only possible conclusions are that a major publication made an enormous error with their first American print issue since 2012—or they caught Bitcoin’s founder and he’s an enormous liar.

That said, it’s tough to dispute the proof that Arthur Nakamoto, Dorian’s brother, offered to the site. He posted a California driver’s license, plus an ID card from Wavestream, where Arthur is known to work. Most importantly, he also posted an old photo of a man—definitely the same guy from that driver’s license—posing with Dorian, whose meme-worthy face went viral after he denied Newsweek’s claim to the Associated Press.

Arthur uses the screen name arthurnakamoto, unsurprisingly. And though he rants about Newsweek and reporter Leah McGrath Goodman, frustratingly, he never explicitly confirms or denies whether his brother founded Bitcoin. He is, however, quite weird. “I am just a humble handsome Asian man who is confused as to how a female asshole can become transferred onto my brother’s rear end,” he wrote.

In Goodman’s story, she quotes Arthur as indicating his brother is the inventor, but it’s far from conclusive:

My brother is an asshole. What you don’t know about him is that he’s worked on classified stuff. His life was a complete blank for a while. You’re not going to be able to get to him. He’ll deny everything. He’ll never admit to starting Bitcoin.

If anything, the other Nakamoto on Reddit is less informative. He adopted the username nakamotodragon, created just for this controversy, though the fact that he called the account his “throwaway” indicates he’s a regular redditor under a different name. He also refused to share exactly what his relationship to Dorian or Arthur is, though he references another user, firmkillernate, who said he’s friends with Arthur’s nephew. Nakamotodragon has offered only one bit of insight so far: that Arthur did, indeed, call his brother “an asshole.” But hey, brothers fight.

Though he didn’t help solve the mystery of the true identity of Satoshi Nakamoto, Arthur did make it clear that Newsweek‘s story has hurt his family:

Do you know what’s a real bitch (I am welling with tears right now) is? I cannot physically go to see him and my mother. To come together as a family to support or call for fear of my immediate family being in physical danger. I can’t go over there to bring groceries or have a private discussion.

At least Dorian’s getting rich out of this.