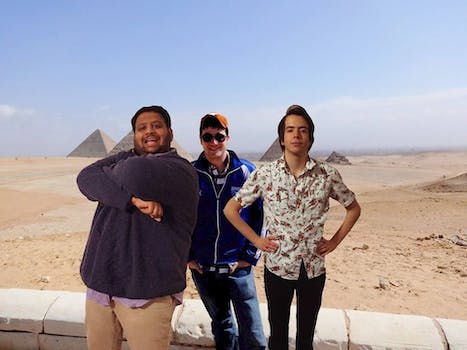 How Grindr and Lunchables won an election for satirical candidates

Thank Yik Yak, Grindr, and Tinder for this underdog win.

Xavier Rotnofsky and Rohit Mandalupu ran a campaign for student body president and vice president at The University of Texas at Austin this year. But unlike most of the other candidates, their campaign featured YouTube gags, mimosa brunch invites to school officials, and public endorsements from area fast food employees.

At first, the campaign was meant to be in jest. “The intention was never to win, it was always to satirize student government elections and the university in general,” Rotnofsky says.

But following a controversial and viral runoff election last week, the pair is now in the awkward position of having to actually govern.

Although Rotnofsky and Mandalupu’s win seems little more than a campus prank gone awry, it’s actually part of a longstanding UT tradition. Every year since 2009, two people from the Texas Travesty, the school’s satirical newspaper, have entered the campaign as a joke—but never with the intention of winning.

During this year’s election, Rotnofsky and Mandalupu came to be known as “Rotman,” and their fame spread beyond the UT campus. For instance, the campaign blew up on Yik Yak, as well as on Tinder and Grindr. It even had a “Tinder correspondent” who responded to the constant matches. The campaign had a motto: “Swipe right to join the dialogue.” 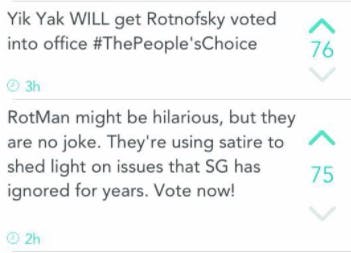 The University of Texas has a long history of ridiculous student government candidates. There was the Mario & Luigi ticket, the guy dressed up as a snowman during the 2004 debates, and Hank the hallucinating cartoon character that won it all in 1982 with more than 3,000 votes.

Unfortunately, because Hank was a fictional character, he was deemed unfit to govern. Runner-up and current CNN politico Paul Begala became president. “I’m not one to make a broad philosophical statement on a joke, and that’s how [Hank’s victory] ought to be taken—as a joke,” Begala said at the time.

But last week, the Rotman ticket finagled a respectable 26.9 percent of the vote. That was enough to force a runoff with presumed winner Braydon Jones, who won the first election with 3,760 votes—good for 46 percent.

We're now available to chat on Grindr! Look up Rot-Man 2015 to get the dialogue started. pic.twitter.com/pGQiqU2RH6

“We were shared on Total Frat Move and from then on our campaign went viral. The exposure through social media and the videos really pushed this campaign into the stratosphere,” says Marshall Kistner, Texas Travesty videographer.

Now that the Rotman campaign is in office, it wants to “increase transparency” by outfitting student government members in cellophane. It has also promised that University President Bill Powers would be out of office by the end of the academic year. It’s a bold initiative, but an easy guarantee, given that this was actually established some time ago by the school.

While Rotnofsky and Mandalupu were elected on the strength of their humorous campaign, they’re taking their duties seriously. The two have already taken action to remove the statue on campus of Confederate leader Jefferson Davis, as Rotman believes it should have no place on the university campus.

But with every serious statement, there’s a joke in place to underline what they see as a patronizing, campus-wide exercise, which saw a 15 percent campus-wide voter turnout last year. Shortly before the runoff election, the Travesty ran an attack ad against its own ticket.

But now that they’re in office, the two hope to bring the focus of student government back to the student body, despite their lack of previous involvement.

“We are two good boys. Hopefully that shows, and we will become two even better boys,” Rotnofsky says.

Before the original election, the pair took part in a debate at the university, where there was a butler who served roses, Little Debbie brownies, and Lunchables to the competitors and moderators.

However, the two refrained from reporting this expense to the campaign, which came back to bite them when a candidate they defeated in the original election reported them to the election advisory board, resulting in a 10 percent cut to their campaign budget.

This “scandal” led to an incident that became known as #lunchablegate.

Aside from #lunchablegate, the Rotman campaign reported spending near $50 for none other than six bags of Hershey kisses and two domain names, which points to their sense of fiscal responsibility.

Whether they thought it would come to fruition or not, #Rotman2015 is happening. Now, UT students are waiting with bated breath for them to come through with their platform promise of bringing a Chili’s to campus.