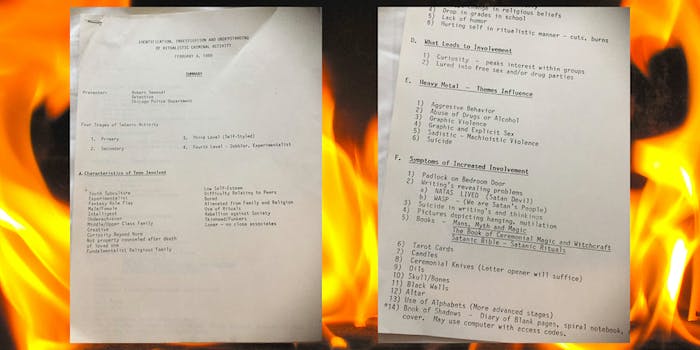 An art teacher in Florida has unearthed some documents from 1989 that were apparently designed to help teachers identify budding young Satanists in their midst.

And, yes, they’re as hilarious as you hope.

Hoooooooly crap guys. My sister is an art teacher in FLA, and she found this AMAZING document in her supply closet pic.twitter.com/QyzAvhjm0E

As ridiculous as it may seem now, the “Satanic Panic” of the 1980s was very real and taken extremely seriously by the vast majority of people in the United States. Everyone was convinced that large, well organized, Satanic cults existed across the country and that they were abusing children, sacrificing babies, and playing Dungeons and Dragons.

You couldn’t turn on the television without hearing about Satanic ritual abuse, which we started abbreviating to SRA because we talked about it so much. It was the go-to subject for daytime talk shows, and even well-respected shows like 20/20 got in on the craze.

The panic reached its zenith in 1987 when the McMartin preschool trial began. Teachers at the school were accused of sexually abusing 360 students in secret underground tunnels built beneath the school. They were also accused of flying.

The first arrests were made in 1984 and the case wasn’t concluded until 1990. No one was found guilty of any crimes and all charges were dropped. It was the longest and most expensive criminal trial in American history.

Whether because of the McMartin Trial, or perhaps the insanity of it all finally dawned on us, by the late ’80s/early ’90s the nation seemed to collectively shake its head and say, “Um, sorry, we went temporarily insane.” Journalists recanted their sensational reports, and parents returned their kids’ twenty-sided dice and Slayer albums.

The resurfacing of these documents, which apparently come from the Chicago Police Department, serve as both a hilarious and painful reminder of a time when we as a nation thought the devil himself was out to get our kids.

Some highlights include references to an organization called BADD, which stood for “Bothered Against Dungeons and Dragons.” You know, because if your kid is in a league with the dark lord that could really bother you.

BOTHERED AGAINST DUNGEONS AND DRAGONS

Such evil spells, like “stop someone from hating you” pic.twitter.com/i9yBqtobTS

And, of course, the dangers of hiking.

For those who want a closer look at the documents, the woman who posted them has now included a link to a pdf document, containing scanned versions of every glorious page.

Obviously, Twitter was thrilled. Everyone had a favorite part.

A few people zeroed in on the documents’ references to Mike Warnke, a Christian comedian who claimed to once be a high priest in the church of Satan.

Is that last entry Mike Warnke? The discredited ex “Satanist” who hit it big as a Christian comedian? Flashbacks, man.

Telling: Mike Wernke listed as a resource. He was a complete fraud who gained fame telling people he was a former high priest of the church of Satan. https://t.co/tVT3nG4TwR

Warnke, if you’ve never had the pleasure, is well worth a look, if for no other reason than that hair, which is clearly the work of the Devil.

It’s easy to look back on these documents now and laugh at them. Even if you’re a Christian who believes in a literal heaven and hell, they are so clearly over the top that it’s hard to imagine a time when people took them seriously.

And yet they did. Innocent people were arrested and thrown in jail. Lives were ruined, not by some evil horned villain that lives under the ground, but by human beings who were swept up in a mass hysteria. If Satan is real, he probably got a real kick out of that.