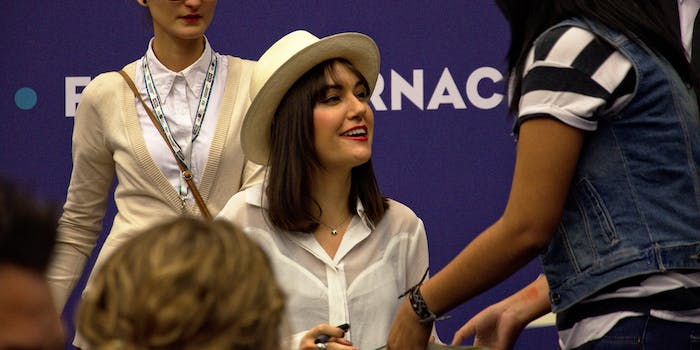 No, Sasha Grey did not get chopped up with an axe by Ukraine's military.

Sasha Grey, the performance artist and actress who starred in The Girlfriend Experience, Entourage, and, of course, 200-some adult films, clarified on Twitter that she was not, actually, chopped up with an axe by Ukrainian military forces.

The rumor comes from a fake post on Dvach, known as the Eastern European 4chan, that said a nurse called Sasha Serova (Serova loosely translates to “gray”) was kidnapped, “humiliated,” and killed by Ukrainian soldiers. The post is filled with sexual innuendo, like “they say she could raise even the most hopelessly wounded men to their feet.” 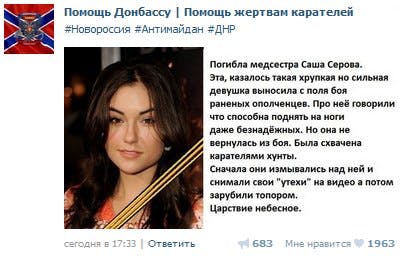 It went viral on VKontakte, the Russian Facebook, according to the Moscow Times, collecting more than 3,500 likes in its first day online—and sympathy for the ex–porn star, who is neither Russian nor Ukrainian.

Sasha Grey was not working as a first-aid worker attending soldiers in the Russia-Ukraine conflict. She did, however, play a nurse in the very popular 2009 adult film Nurses.

She addressed the hoax, calling it propaganda:

I <3 my Russian fans, but this propaganda takes it too far. News that I was a NURSE killed in the Russian/Ukraine conflict. #fuckpropoganda

People are dying. People are losing family members & BS outlets mock the deceased with Fappery like this

Just an FYI some other conservative propaganda outlet labeled me & other Russian artists as friends of the Hunta just last summer/fall.

So to make it clear FIRST I was the ENEMY & now I'm a FRIEND because this was supposedly the fault of Ukrainians.

I have love & respect for all of my Russian & Ukrainian fans, I wish there was more I could do. #peace

She’s referring to a December 2013 incident in which she told Kiev protesters to “stay strong”—a line that was blasted in Russia for pro-Ukraine sentiment.

Propaganda has played a part in twisting the public view of the warfare in Eastern Europe. The misinformation is not just online and overseas. Even in the U.S. Senate, earlier in February, Jim Inhofe presented photos of “Russian tanks entering Ukrainian territory” to support U.S. lethal action against Ukraine. The photos were actually from about seven years ago, and the Russian troops where near the Georgian border.

For its part, Dvach users seem to be focused on spreading false information to troll their own country’s gullible patriots.