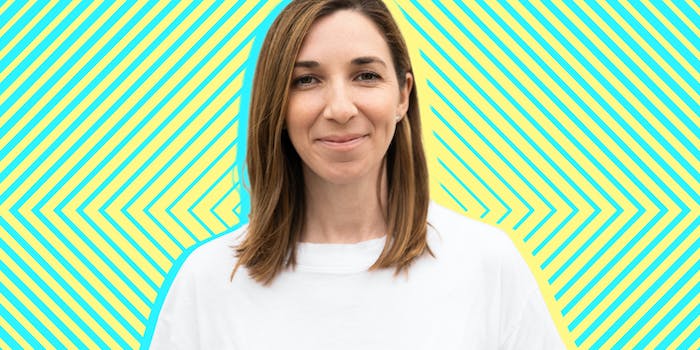 This month, creator subscription platform Patreon announced that Sarah Penna—a business leader and YouTuber supermanager with more than 14 years of experience—will be joining Patreon as senior manager of creator launches. In this new position, Penna will launch “high-profile” creator partnerships, according to Patreon.

The Daily Dot spoke with Penna about why she joined Patreon, how her career path led her to where she is today, and what her advice is for aspiring creators in an exclusive interview.

Penna started her career with creators in the early days of YouTube. In 2009, Penna became the manager for YouTube star Phillip DeFranco. Penna said she worked for DeFranco wearing many hats: Producing, doing public relations, and helping him with brand deals.

In early 2010, Penna parted ways with DeFranco to start her own company called Big Frame. “I started seeing brands get more and more interested in the YouTube space. So I decided to start a management company that would focus exclusively on helping YouTube creators monetize.”

Penna started by raising some venture capital and taking a talent-management approach. “We really differentiated ourselves by being a very creator-focused company, at a time when a lot of companies were focused on scale.”

As she spearheaded the development of this digital talent management company, Penna said she faced many skeptics: “I was very young when I started my first company and I was doubted a lot. It’s hard not to let that get into your head. But it’s also fun to prove them wrong.”

Despite the doubts Penna faced, Big Frame ended up becoming a leading media company. They signed over 300 creator-run YouTube channels with a combined following of over 200 million on social media.

In April 2014, Big Frame was sold to Dreamworks for $15 million and was bundled up with YouTube multi-channel network AwesomenessTV. After three years of work for AwesomenessTV, Penna left to build Frolic Media, which was focused on a completely new set of creators in the romance novel fandom.

Finally in 2021, Penna said she sought out a role at Patreon. “I’ve always been impressed and enamored with how creator-first Patreon is, and the focus they have on bridging that gap between what creators are making and what their art is valued at.”

Penna said that she knew Patreon’s Head of Creator Partnerships Avi Gandhi and that she chatted with him about the new Creator Launch team he was assembling: “It was sort of me instigating and curious about what was going on. Then the role opened up and it just kind of made sense.”

On Patreon’s launch team, Penna works with creators after they are already thinking about launching a page on the platform. She helps guide them in best practices for building and launching their pages. When working with larger creators, Penna will sometimes do bigger marketing activations, like launch parties and billboards. “We get to build rapport with creators and help champion their success on the platform.”

Penna said that she thinks the biggest mental hurdle creators face on Patreon is looking at a blank page and wondering where to begin: “Start with the easy stuff. Put in a nice banner image, put in your photo, just sign up for the page. Start playing around with that without the expectation that you’re going to be the biggest creator on the platform.”

Penna shared that she is a big fan of the “1,000 True Fans” belief, an idea proposed in 2008 by founding executive editor of Wired magazine Kevin Kelly. The belief is that an artist only needs 1,000 true fans—who will buy whatever you produce—in order to maintain a successful career.

“Go in without the expectation that you’re going to be the biggest. If you can come at it with that mindset, you’re going to have more fun and you’re going to be more creative with it. And in turn, theoretically that makes you more money. That’s really the goal for us, to help creators make a living wage,” she said.

One tip Penna shared for creators looking to be successful on Patreon is to test the waters with your audience to discover what kind of exclusive content they might want: “We recommend talking to them about it before you launch and get some feedback, what do you guys want to see?”

Furthermore, Penna recommended that creators consistently remind their followers that their Patreon page exists: “Most people who listen to podcasts will know this. You hear about the podcast’s Patreon in every episode.”

Penna continued, “We also really recommend doing teasers. We’ve seen really great success with this for podcasts— you make a specific episode that’s just two minutes and explains to people what’s going to be on the Patreon. Then, it’s in their feed.”

When advertising your Patreon, Penna recommends you get as specific as possible about what your audience is going to get: “Not to drive FOMO or make people feel bad, but just to celebrate and invite people into the community and say, ‘Hey, we’re having a lot of fun over here.’”

Penna also recommends that you don’t be shy about asking to be paid for exclusive interactions. “Shift that mindset of you’re asking them for something, and instead you’re giving them something. It’s true—you’re giving them value. It’s not very fun to interact with your favorite creators on Twitter, for example. They may respond, they may not. You’re giving them this opportunity to interact in a much more intimate environment.”

Beyond Patreon, Penna shared her key advice for creators hoping to launch and develop their careers: “Find your niche. Niche is really where it’s at.”

“Don’t chase trends, unless you have a really good reason to,” Penna continued, “I see a lot of creators feel the pressure, for example, to figure out crypto. OK, educate yourself on that. But I don’t think you necessarily have to jump on that if you’re, say, a watercolor artist, you know?”

Penna continued, “It’s easy to get distracted. Stay educated, but don’t completely shift or pivot your business based on a fear that you are going to be too late if you don’t do it right then.”

For those who are interested in a career like Penna’s, she had some more words of wisdom: “My career has been very non-linear. The biggest challenge I faced was thinking that my resume needed to look one way, and that no one was going to take me seriously because all I had under my belt were startups.”

Penna continued, “If you can articulate your journey in a certain way that’s the most important thing. Be able to be a good storyteller, invest in that. That will get you further than whatever your GPA was in college.”

Are you a business leader working with creators? Email [email protected] for a chance to be featured in an upcoming newsletter.