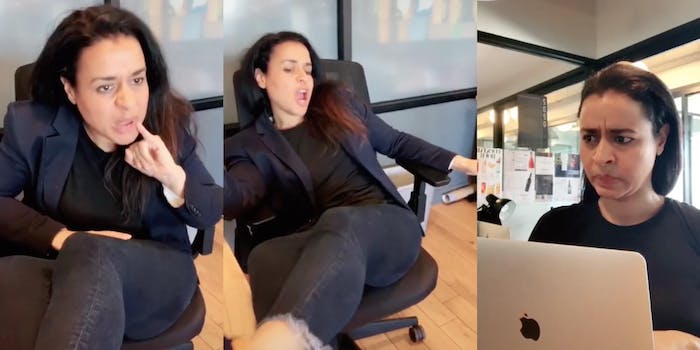 Trump probably didn't see it. He has her blocked.

The New York City comedian takes sound bites from the president and lip-syncs and pretends to be him over the audio. The TikTok star started making her Trump videos in April.

In her most popular TikTok, she lip-syncs over audio of a journalist asking Trump for his favorite Bible verse. In the audio, it appears clear that the president does not know a verse, so he continues to say that the Bible is “very personal” and won’t share a passage.

“The Bible means a lot to me, but I don’t want to get into specifics,” Cooper lip-syncs over Trump’s voice.

During the coronavirus lockdown, many of her TikToks have focused on the disease. In one of those, she lip-syncs to the audio of Trump saying the nation has the most coronavirus cases because it tests more people than other countries.

In her most recent video, she pretends to be Trump as he promotes the size of his Tulsa, Oklahoma rally. In it, Trump said that about 900,000 people wouldn’t be able to attend because they couldn’t possibly all fit in the arena. However, the rally on Saturday had an “underwhelming” turnout with empty seats, according to news reports.

Her lip-syncs mixed with comical acting are sweeping the internet. The TikToks are so popular that her name has started to trend on Twitter after every new video publication.

After Monday’s rally TikTok, people suggested her for the position of president or vice president. On Twitter, people are praising her for this new form of critical humor.

“It’s been 4 years of Cheeto this and orange that, comedy so toothless I thought we were lost, then Sarah Cooper…cracked the f*cking code,” comedian Laurie Kilmartin wrote.

While Cooper continues to experience success on social media, not everyone is pleased. Apparently, Trump has had her blocked her on Twitter for a while now. Cooper has “#blockedbyTrump” in her bio, and she now calls him her “head writer.”