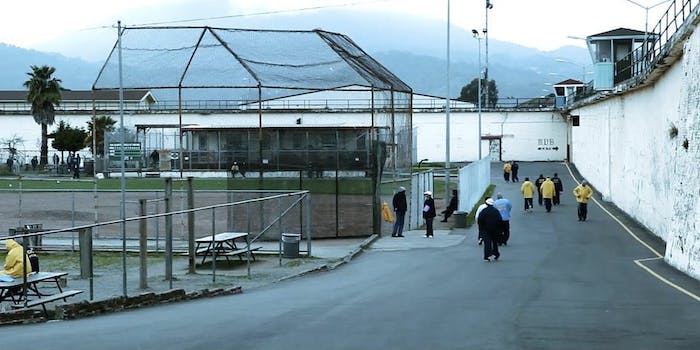 A profile of one stellar organization that helps address the dearth of technological innovation for prisoners.

In today’s digital society, it’s tragic that administrators block prisoners from access to the Internet. Such backward thinking contributes in significant ways to high recidivism rates. If prisoners return to society without basic technological skills, they face even higher hurdles in trying to secure employment.

But it doesn’t have to be that way. And sometimes, it isn’t. Thanks to technology investors Chris Redlitz and Beverly Parenti of Transmedia Capital and KickLabs, men confined to San Quentin’s state penitentiary have access to a groundbreaking program called The Last Mile. Chris and Beverly Redlitz fund and organize this hopeful effort to help prisoners become more fluent with the digital world.

California’s recidivism rates now exceed 70 percent; prison budgets hover in the $10 billion range each year. In this context, we need innovation like The Last Mile program more than ever. It has enormous potential to prepare its participants to help them overcome the challenges they will find upon release—and to add more value to prospective employers. The sad reality is that prison administrators currently tend to erect obstacles that render prisoners less likely to function in society. Community organizations like The Last Mile work hard to tear those obstacles down, building a bridge that connects the men locked inside barbed wire bureaucracies with citizens of the world.

I met Chris Redlitz soon after authorities released me from 25 years in federal prison. While mentoring me on how to build my career, Chris told me his own story of how he became involved with prisoners, and why he believed that providing them with indirect access to the Internet strengthened their possibilities for success upon release. 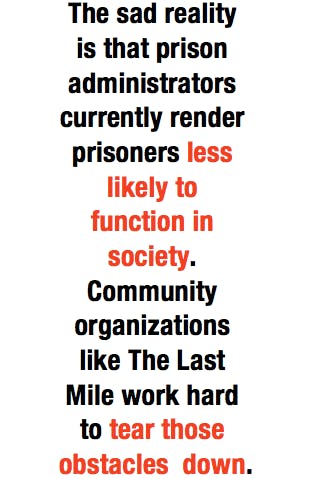 As a resident of Marin County, Chris told me that he had always known of San Quentin, but he never gave it much thought until he received an invitation to make a presentation inside the prison. He accepted the invitation reluctantly, expecting to talk for 15 to 20 minutes about his role as a San Francisco venture capitalist. While speaking, however, Chris was inspired by the prisoners’ innate curiosity. The men were hungry to learn—and, as he realized from their questions, totally isolated from technology and the evolving world around them. Rather than speaking to the prisoners for 20 minutes, Chris ended up staying in San Quentin for several hours. He drove home with a determination to make a contribution.

Chris’s wife Beverly Parenti was also his business partner at San Francisco’s KickLabs, one of the nation’s top-ten business incubators. Chris invited her to visit San Quentin with him the following week, but Beverly said that she didn’t want any part of mentoring people in prison. Chris persuaded her to join him, in the end, promising that if she didn’t walk out inspired, he’d never ask her to go with him again.

Chris and Beverly designed The Last Mile program as a resource to prepare selectively chosen San Quentin prisoners for success upon release. Those who applied had to go through a rigorous application process. Although more than 1,000 people were confined inside the prison’s boundaries, The Last Mile accepts fewer than a dozen prisoners for each six-month training session. 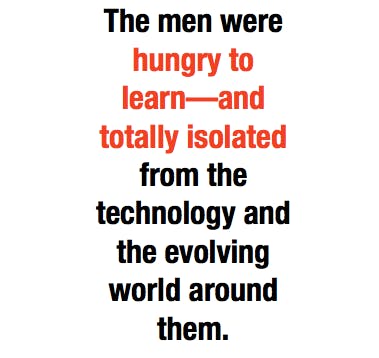 The men meet twice weekly to learn about the digital economy from not only Chris and Beverly, but from many leaders in technology who visit as guest lecturers to discuss business. Those lessons broaden the participants’ understanding of business and social media. They also show the men how to build skills in relevant areas that could lead to employment in the high-technology sector. Topics of discussion include communications, business formation, and best practices for operations in a digital economy.

Chris and Beverly drew upon their deep connections in the high-technology business community to bring A-list investors and entrepreneurs into The Last Mile program for the purpose of mentoring the men inside. A few of the guest lecturers that have contributed to The Last Mile include former Apple evangelist Guy Kawasaki; technology author and speaker Brian Solis; and Erik Moore, a seed investor in Zappos and other web-based companies. Even M.C. Hammer has attended. Other Internet luminaries like Mastin Kipp of The Daily Love have gotten involved, opening up opportunities for The Last Mile participants to share their experiences. 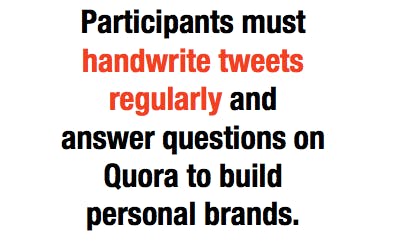 The Last Mile program has a rigorous curriculum, requiring participants to read numerous books about the digital economy. Although they still do not have access to computers or the Internet, participants must handwrite tweets regularly and answer questions on Quora to build personal brands that would show participants as being contributing members of society rather than carrying only the stigma of prisoners. Chris and Beverly put mechanisms in place to build a coterie of volunteers; The Last Mile volunteers converted the many tweets and Quora answers into a digital format and then loaded them onto the Web. One of the many stars of The Last Mile project, Kenyatta Leal, garnered so much attention for his eloquent answer to a Quora question that he won a Quora Answer-of-the-Year-Shorty Award.

To graduate from The Last Mile, each participant must complete a final project. They have to create a business idea and write a business plan that includes a technology component and social cause. The men refine their pitches, then deliver it in five minutes to a live audience of venture capitalists that Chris and Beverly bring into San Quentin for The Last Mile’s Demo Day—which has now become a star-studded event.

I’ve had the privilege of meeting two of The Last Mile’s participants who have since been released from San Quentin. One is Tulio Cardozo, who interned at Kicklabs upon his release and has since launched his own technology company. Another is Heracio Harts, currently an intern at Rally.org, one of the leading web-based crowd-funding ventures.

The Last Mile makes use of the Internet to prepare offenders for law-abiding, contributing lives. Expanding this type of program—one that realistically and constructively prepares prisoners to emerge as law-abiding citizens—would be in everyone’s best. Unfortunately, it could prove difficult to replicate. As successful venture capitalists, Chris and Beverly have the rare quality of business credentials that can attract high-level technology professionals to serve as mentors for the men in prison. Without them, it’s unlikely so many would have gotten involved. And San Quentin’s proximity to the well-educated, affluent workforce of San Francisco opens opportunities to attract mentors and volunteers that might not be so readily accessible in the rural communities where most prisons operate.

As much as we need programs like these, the unfortunate truth is they’re unlikely to become a system-wide benefit. The prisoners at San Quentin are fortunate to be a part of such a magnificent program, and as the many videos show on The Last Mile website, they know it.

Image via The Last Mile/YouTube