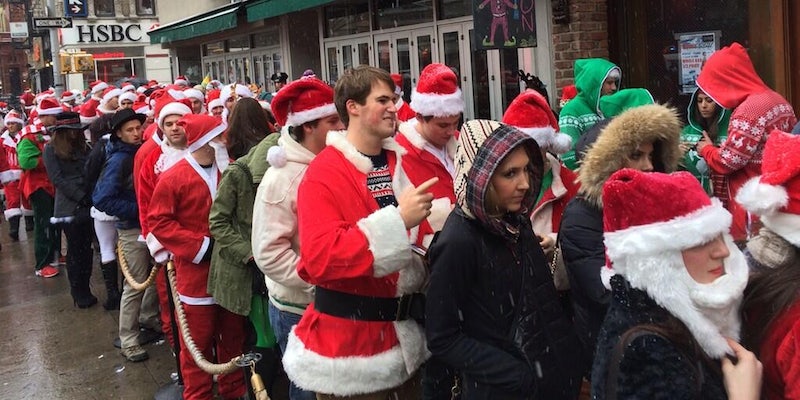 It’s that time of year to dress like an asshole and bar hop and drink all day. #santacon #santaconnyc https://t.co/2xICL3VJ8Y

In the middle of the journey of our life
I found myself within a dark woods
where the straight way was lost. (Inf. I. 1–12)

I reached a place where every light is muted,
which bellows like the sea beneath a tempest,
when it is battered by opposing winds.
The hellish hurricane, which never rests,
drives on the spirits with its violence. … (Inf. V, 28–39)

Here, more than elsewhere, I saw multitudes
to every side of me; their howls were loud (Inf. VII, 25–36)

RT if this is your worst nightmare: #santaconnyc meets #citibike pic.twitter.com/8agAeCbsLL

[T]hree winds blew from him in one great storm:
it is these winds that freeze all Cocytus.
[Satan] wept from his six eyes,
and down three chins the tears ran mixed
with bloody froth and pus. (Inf. XXXIV, 52–55)

Well, I saw a Santa with ICP makeup so nevermind about going outside I guess

[Virgil to Dante]: “But fix your eyes below, upon the valley,
for now we near the stream of blood, where those
who injure others violently, boil.” (Inf. XII, 46–48)

Do not ask, Reader, how my blood ran cold
and my voice choked up with fear.
I cannot write it: this is a terror that cannot be told.
I did not die, and yet I lost life’s breath:
imagine for yourself what I became,
deprived at once of both my life and death. (Inf. XXXIV, 22–27)

Their sighs, lamentations and loud wailings
resounded through the starless air,
so that at first it made me weep;
Strange utterances, horrible pronouncements,
words of pain, tones of anger,
voices shrill and faint, and beating hands,
all went to make a tumult that will whirl
forever through that turbid, timeless air,
like sand that eddies when a whirlwind swirls. (Inf. III, 22–30)

This miserable state
is borne by the wretched souls of those
who lived without disgrace and without praise. (Inf. III, 34–36)

Ugh, Santacon participants, didn’t anyone ever hug you

Heaven, to keep its beauty,
cast them out, but even Hell itself would not receive them
for fear the wicked there might glory over them. (Inf. III, 40–42)

@_Cooper GET ME OUT OF THE EAST VILLAGE.

Consider your origin;
you were not born to live like brutes,
but to follow virtue and knowledge. (Inf. XXVI, 118–120)