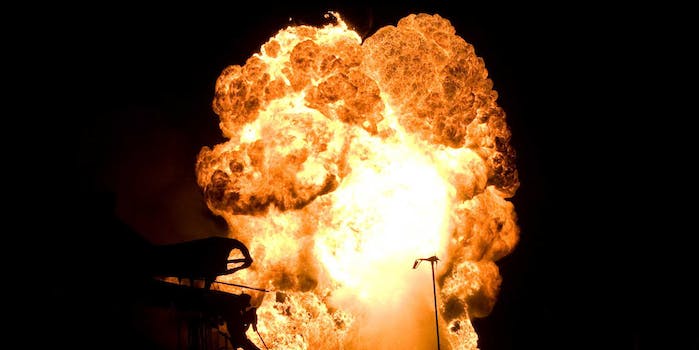 And boom goes the dynamite.

Much fuss has been made in the past about batteries in cellphones overheating, melting or even exploding: Early this year an eighth-grader from Maine was rushed to hospital with burns after her iPhone exploded in her back pocket.

The cause of that incident was unclear, but there’s no such mystery concerning the explosion recently caught on camera and uploaded to YouTube.

The video—originally uploaded to LiveLeak, with subtitles added by Richard Sherman, shows a Samsung cellphone battery transforming into a fireball and shooting into the air like a rocket. Why? Because it was hit with a hammer.

“They said Samsung batteries explode. I saw this on Facebook and it exploded,” says the the unidentified Adidas sandal-wearing star of the video. “Now let’s try it, will it explode or not, let’s try it.”

And so, in the spirit of scientific enquiry, he took shelter behind his metal shield, counted to three, and hit it.

“Ohhhh… it does explode,” exclaims the unseen cameraman afterwards.