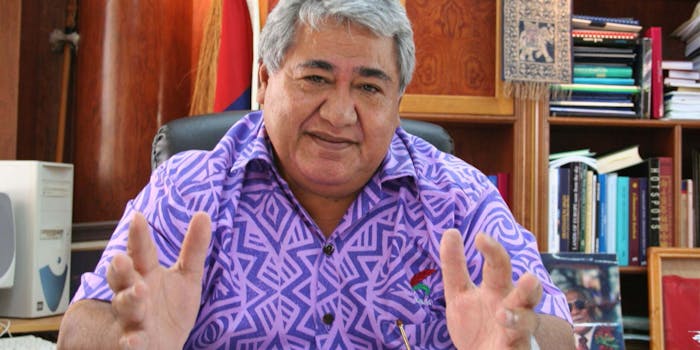 YouTube insult leads to fine of 2 cows, 30 cartons of fish

In a handful of countries, insulting your head of state online can net you a prison sentence.

That’s the case of an unnamed young man from then Samoan village of Sili, who allegedly insulted prime minister Tuilaepa Sa’ilele Malielegaoi. His method? Creating and uploading a YouTube video that criticized Malielegaoi, which gained viral traction on Facebook.

Details on the video are scarce, save that the young man parodies a newscaster, and shot the video on his phone. The Samoa Observer noted that “for legal reasons, we cannot tell you what he said,” but quoted police calling the video “emotionally distressful,” and carrying “verbal harassment towards the Prime Minister.”

The young man’s family has already paid the fine in full, and Sili itself formally apologized to Malielegaoi. Still, the young man remains in custody. The Prime Minister only fully accepted the apology Sunday, and said he would debate whether to press charges with police.

Despite the amends, Malielegaoi was quoted in the Observer as staunchly insisting the act was criminal.

“When you use a phone to defame someone, you are liable to the law. If you cross that border, you can be charged by the police,” he reportedly said.