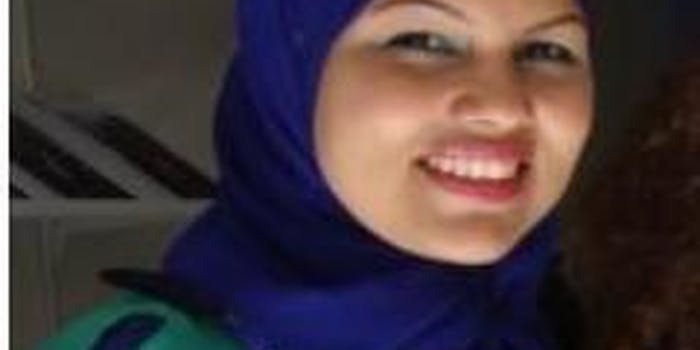 After Twitter users dug up a series of racist and anti-American tweets, the State Department removed Samira Ibrahim from a list of recipients of the International Women of Courage Award

Egyptian activist Samira Ibrahim was set to be feted in Washington today for taking on the country’s powerful military after she and other protesters were subjected to “virginity tests” during protests at Tahrir Square in March, 2011. But the State Department has removed Ibrahim from a list of recipients of the International Women of Courage Award after Twitter users dug up a series of racist and anti-American tweets.

“An explosion on a bus carrying Israelis in Burgas airport in Bulgaria on the Black Sea,” read one Tweet Ibrahim published on July 18, 2012, after five Israelis were killed in a bombing. “Today is a very sweet day with a lot of very sweet news.” (The New York Times translated.)

In another, she quoted an anti-Semitic line attributed to Hitler: “‘I have discovered with the passage of days, that no act contrary to morality, no crime against society, takes place, except with the Jews having a hand in it.’ Hitler.”

And on the anniversary of Sept. 11 last year, Ibrahim took an anti-America turn: “May America burn every year,” she wrote.

Ibrahim initially blamed the tweets on hackers, but has since backed off that stance. She tweeted on Wednesday, “I refused to apologize to the Zionist lobby in America for previous comments hostile towards Zionism under pressure from the American government so the prize was withdrawn.”

A State Department official suggested to The New York Times that Ibrahim was still under consideration for the award, but that it needed more to investigate the comments. Ibrahim had become “a real leader in her country in trying to address gender-based violence and other human rights abuses,” the official said.

Indeed, as vile as Ibrahim’s comments may be, they change little about her work on behalf of women. She is both a brave human rights activist and an anti-Semite. Two characteristics that are, unfortunately, not mutually exclusive.