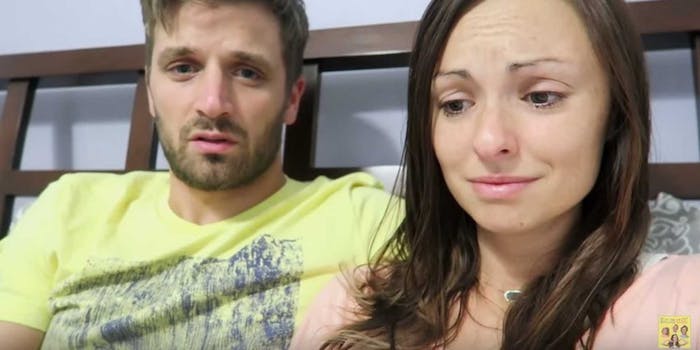 Over the past few weeks, popular Christian vlogger couple Sam and Nia Rader have found themselves embroiled in an unexpected controversy. After a video featuring Sam, a father of two, surprising his wife, Nia, with her own pregnancy test—clandestinely taken from urine left in an unflushed toilet—garnered more than 11 million views on YouTube last week, the couple released two more videos in which they announced Nia’s sudden miscarriage. What might typically be a tragic moment for any family became an opportunity for online skeptics to accuse the couple of staging the surprise pregnancy test—and even the miscarriage.

BuzzFeed spoke with doctors from the Mayo Clinic who questioned the validity of the pregnancy test, directly accusing the Raders of falsifying the video so Sam could quit his job as a nurse and vlog full time. Gawker accused them of “manipulating viewers for non-skippable ad views” and openly questions the level Sam and Nia Rader are mourning after the miscarriage. Wonkette called them “Good Christian Fame Whores” and the Daily Beast accused the couple of using the miscarriage “to push for Jesus.”

In response, Sam Rader responded in a recent video: “A lot of people think it was staged. I’m like, you know what? It was staged. It was all orchestrated by God above and nothing less.”

What might typically be a tragic moment for any family became an opportunity for online skeptics to accuse the couple of staging the surprise pregnancy test—and even the miscarriage.

The level of vitriol the couple has received, including the investigative attention of supposedly serious news outlets, should also force some soul-searching. Sam and Nia Rader’s detractors will only further encourage others to be silent about their miscarriages or keep them from sharing their experiences. In doing so, we will only foster misunderstanding and misinformation. I know we all enjoy the public shaming of those we perceive aren’t being fully real, but we should remember the truth explained by Hanlon’s Law: “Never assign to malice that which can be explained by incompetence.”

The biggest question the Sam and Nia Rader truthers should be asking themselves is simple: What if they aren’t lying? The Raders are mourning the death of a child and may feel they have to do so publicly because—against most sound advice—Sam announced the pregnancy to his family and the world far before the window of a likely miscarriage was closed. It’s the misconception of a miscarriage as a rarity (or something that only happens to careless women) that leads many to spread the news of their pregnancy to families, friends, and coworkers as soon as they know.

Rather than lying to their YouTube followers, Sam and Nia Rader are more likely guilty of the common decision of announcing a pregnancy too early. As Heidi Murkoff, author of What To Expect When You’re Expecting and arbiter of the “Ask Heidi” column notes, most women wait until the 13th week to reveal publicly that they’re pregnant “when the rate of miscarriage goes way down.” However, as Murkoff notes, that decision relies upon the dated cultural stigma surrounding miscarriages.

“Some moms-to-be feel they wouldn’t shy away from sharing any sad news,” writes Murkoff, “even if they were faced with a miscarriage. And so, they reason, why not broadcast the baby bulletin as soon as possible?”

One worrying trend that belies that is “test tweaking,” when women use photo editing software like Photoshop to analyze pregnancy tests, hoping (or dreading) a faint positive mark. Despite the fact that experts warn a “chemical pregnancy” can give a faint false positive on a home urine test, popular forums advertising tweaking as a service have sprung up, mostly for women striving to become pregnant. The inherent risk in tweaking is setting up woman who, like Nia Rader, would welcome a child as a literal gift from God, for profound disappointment and strife.

The biggest question the Sam and Nia Rader truthers should be asking themselves is simple: What if they aren’t lying?

This culture of misinformation extends to the rate of miscarriages themselves—which are far more common than most people think: About half of all fertilized eggs will be “spontaneously aborted,” according to the U.S. National Library of Medicine, and most of those will occur before the woman even realizes she’s pregnant. But according to a massive new survey published in the journal Obstetrics and Gynecology, most people think failed pregnancies happen only six percent of the time. For women who are knowingly pregnant, it’s more like 20 percent.

Survey respondents were also misinformed of what causes a miscarriage, with 76 percent agreeing that stress can cause a miscarriage and 64 percent blaming the lifting of a heavy object (miscarriages are generally caused by a chromosomal mutation in the fertilized egg). This fuels a cycle of guilt that keeps miscarriages from being openly discussed and, therefore, normalized. In their own announcement of a coming child, Facebook CEO Mark Zuckerberg and his wife, Priscilla, recently spoke of her own failed pregnancies.

“Most people don’t discuss miscarriages because you worry your problems will distance you or reflect upon you, as if you’re defective or did something to cause this,” wrote the CEO. “So you struggle on your own.”

Just this week, How I Met Your Mother actress Eva Amurri Martino—who is also the daughter of Susan Sarandon—revealed she likewise suffered a miscarriage on her personal blog Happily Eva After, in which she documents the struggles of balancing a marriage and raising children. In a post entitled “Little Angel,” Amurri Martino walks readers through the excitement she felt for her second child—only to have doctors reveal the egg had failed while still inside her womb and needed to be removed.

“I am sharing in the hopes that we can be a light for people going through similar circumstances,” she writes, “and to remind myself and others that there is no shame in voicing our heartbreaks and allowing others to comfort us.”

Nia Rader shared a similar sentiment in the couple’s tearful video announcing the miscarriage. “I just want to say, too, that maybe there’s someone out there who is going through this with us,” said Nia. “You know, the Bible says to weep with those who weep and mourn with those who mourn, and I am mourning with those of you who are feeling this.” From this perspective, Sam and Nia Rader aren’t the perpetrators of a fraudulent YouTube stunt, as BuzzFeed and Gawker are alleging, but part of a necessary conversation, one that combats the shame many expecting parents feel when a pregnancy fails.

This fuels a cycle of guilt that keeps miscarriages from being openly discussed and, therefore, normalized.

To be sure, if there were a fake-a-miscarriage-to-get-famous archetype, the couple would fit the bill. People have certainly done worse to go viral on the Internet, like one Reddit user who confessed to a murder to rack up “karma” points on the site (the irony of which is fairly disturbing). And the gimmicky pregnancy announcement, based on a dubious test, followed by the immediate tragedy does raise alarms.

After the miscarriage announcement, the couple posted a bizarre tweet looking on the bright side of the situation—by bragging about how many hits the videos brought in. “Our tiny baby brought 10M views to her video & 100k new people into our lives,” Sam Rader tweeted. In an interview with BuzzFeed News, he further explained, “I’ve always had a dream to be famous.”

The pair previously became famous after lip syncing to a song from Frozen earned them over 21 million views. Having had a taste of viral fame, a cynic might say, the couple was willing to falsify even their family’s future in order to capture a similar windfall from unskippable ad revenue. Not helping the situation are unflattering videos the couple has posted of themselves, like one in which they unsuccessfully attempted to use their YouTube celebrity to get a free pass to Legoland.

While these details might change your opinion of them, whether or not you like someone shouldn’t have any bearing on whether or not you believe them. This is what women’s rights activists have long argued when it comes to sexual assault—should a woman report being raped, you don’t have to agree with her “choices” (see: the old short skirt canard) in order to trust her or listen to her.

BuzzFeed and Gawker may be right—and we’ve caught a couple attempting to falsify and profit off something that does genuinely hurt people. But just as many people are harmed when we attempt to paint grieving parents—even those we might not like—as insidious liars.