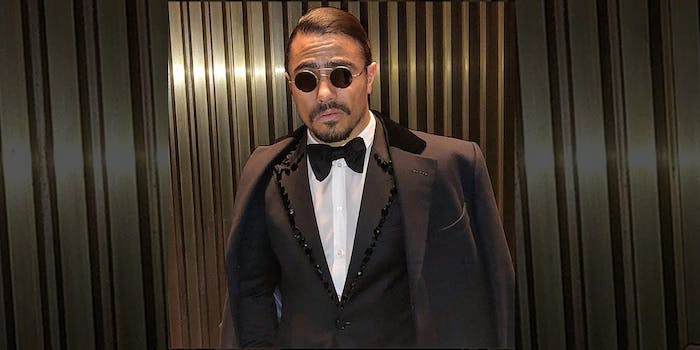 He rides a hoverboard and calls his signature move a work of 'art.'

The signs were there all along, but now we have substantial proof. Nusret Gökçe, aka Salt Bae, is a kind of a tool.

In a New York Times profile published on Friday, Gökçe reveals a few choice details about his personal life. The story, which is part of the Times‘ regular column on what New Yorkers do with their Sundays, also featured several photos of Salt Bae doing things like smoking a cigar and hitting the gym—all while wearing his signature round sunglasses.

Gökçe, of course, became a meme after a photograph emerged of the Turkish restaurateur sprinkling salt on a piece of meat. His recently opened New York City restaurant, Nusr-et Steakhouse, is attracting a lot of attention from celebrity diners and the media.

Here are the highlights from the Times piece:

Yes, 13. Gökçe is a 35-year-old “bachelor” with 13 children. The Times doesn’t specify where these children are currently located or how often he visits him. They are only mentioned once, in parentheses. However, Gökçe has posted photographs on his Instagram account with some (of presumably his) children.

#SaltBae pulls bones out of ribs but in real life likes to leave it and let it marinate. pic.twitter.com/TtW0TOItfQ

Salt Bae rides a ‘hoverboard’ to work from the Plaza Hotel

Gökçe commutes to his NYC restaurant from the Plaza Hotel with a self-balancing board. (Which some people still claim is a “hoverboard.”) Unfortunately, the Times did not take a photo.

Salt Bae chooses not to get tired

When the Times asked him if he is exhausted after leaving work at 2a.m. and waking up at 7a.m., Gökçe gave an answer that sounded like something out of a Silicon Valley tech conference.

Gökçe also said that he does a “mental evaluation of the day” before going to sleep.

Sprinkling salt on meat is a form of art, Gökçe said. “I view my job as an art because I make art out of meat and the move is like a final touch on this art.”

Salt Bae loves his fans—and himself

“I love myself,” he told the Times. He also said that Americans, particularly New Yorkers, also love him. That’s a lot of love going around.

Overall, Gökçe comes off more like a performance artist than a culinary genius. But that’s probably what we should expect from people who find professional success from a meme.