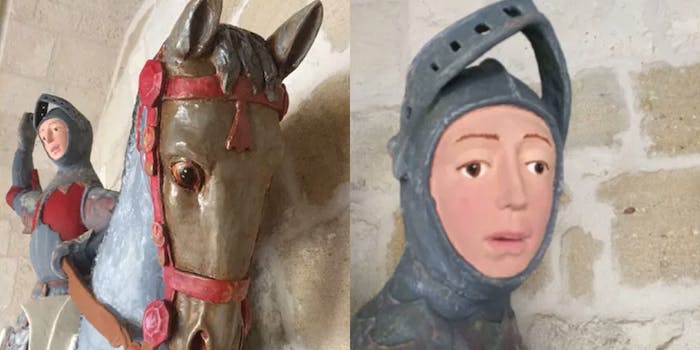 A 500-year-old wooden statue of Saint George riding a horse, located in the town of Estella, Spain, was given a much-needed restoration recently, but art lovers, both in Spain and abroad, are not exactly thrilled with the results.

According to The New York Times, a local company specializing in furniture repair, and arts and crafts for children, was given the job. Which makes sense as the finished version looks a lot like a child in a costume riding a merry-go-round horse.

“Once again in Spain, a work of art is destroyed again.” A Barcelona man ranted on Twitter, “This image is of San Jorge and of the XVI century of San Miguel de Estella (Navarra). Curious that the bosses hire such restorers, maybe they would have to restore the bosses that hire them, right?” [Translated from Spanish]

The “Once again” most likely refers to a well know 2012 restoration of painting of Jesus Christ—Ecce Homo—by a woman named Cecilia Giménez. That particular restoration was so bad it became a huge internet meme, and eventually led to the “restoration” being mocked on Saturday Night Live.

Others agreed that the statue restoration was reminiscent of the Giménez work.

Although, as pointed out by NPR reporter Camila Domonoske, the statue restoration was done by a professional company hired by the church, whereas Cecilia Giménez was an 81-year-old, somewhat overzealous, parishioner who was trying to help.

“I don’t think it was done with malice,” Estella mayor Koldo Leoz said of the company who repainted the Saint George statue, “but they obviously have not acted responsibly with the treasure they had in their possession.”

The newly painted statue has also drawn comparisons to some famous cartoon characters, including Woody from Toy Story.

And even Lego Knights.

“I saw photographs of the atrocity they were committing,” said Carmen Usúa, the owner of a restoration company near the church. “As a professional, I feel disconcerted and very offended. It takes years to acquire the skills necessary to carry out these kinds of restorations, so imagine the frustration when something like this happens.”

“We have experts examining the statue now to see whether the damage can be undone,” Mayor Leoz told the Times. “It’s possible the detail of the armor and original colors have been lost forever.”

Possible, but not certain. After all, if a Roman saint can’t slay a dragon, certainly there’s hope that an artist can restore a statue to its former glory. All it will take is a miracle.