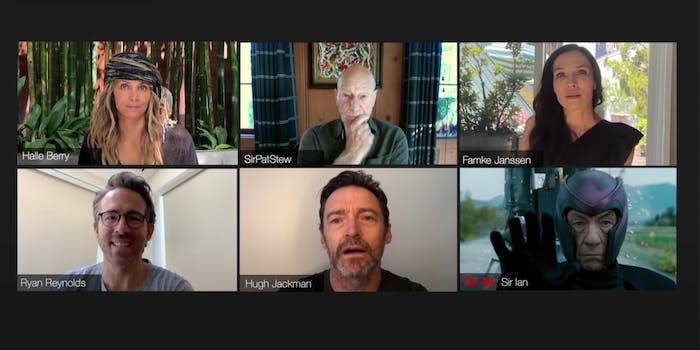 The latest trolling effort arrived amid a taped 20-year X-Men reunion during Global Goal: Unite for Our Future, a concert special that helped raise more than $6.9 billion last week, between Jackman, Patrick Stewart, Ian McKellen, Halle Berry, and Famke Janssen. The video, which was formatted as a pre-taped Zoom call, starts off with a little reminiscing over the film before Reynolds, whose first X-Men appearance was in the 2009 spin-off X-Men Origins: Wolverine, popped in.

If you’ve paid any attention to Reynolds and Jackman’s riffing over the years, Reynolds’ jumping into the call uninvited and pulling off plenty of meta about how little sense the timeline of the X-Men movies make as Sophie Turner and James McAvoy (Jean Gray and Charles Xavier in the newer films) also show up before switching over to other Zoom reunions.

“So many timelines,” he said. “It’s like a recap of Knots Landing.”

It’s been a key part of how both his Deadpool is portrayed and how he’s been promoting those films. But in Reynolds’ case, it’s just as much a chance for everyone to poke fun at Reynolds’ first Deadpool movie—aka the one where the Merc with a Mouth had his mouth sewn shut.