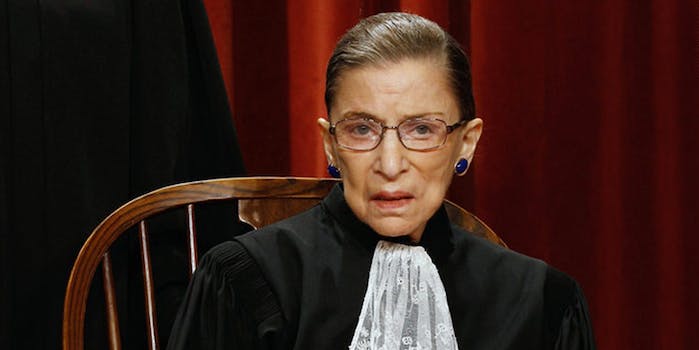 Never underestimate the power of a meme.

Millennials: Disengaged, politically apathetic, and incapable of participating in the democratic political system, right? It’s what we’ve all been told, repeatedly. But in fact, the math doesn’t bear out, and neither does the level of political engagement online from millennials, a group has done more to advance Washington pop culture than any other. It’s time to trash the myth that millennials don’t care about politics, along with the notion in general that the youngest generation cares least about the future.

Millennials have created a political fandom, and they’re flocking to it in droves. Hillary Clinton and Justice Ruth Bader Ginsberg have become Internet idols, while an army of Washington gossip sites as well as satirical destinations like Wonkette has arisen to bring the latest in rumors and more to the Internet. Millennials are participating directly in Internet commentary and they’re keeping up with the latest political news on The Daily Show—notably for a comedy show, it’s pulling in higher ratings than legitimate news shows, and it’s been raking up awards. That speaks to a lively, engaged populace.

Moreover, politicians are rolling with the shift in the political landscape. Hillary Clinton thought “Texts From Hillary” was funny enough that she made a few of her own, and Justice Ginsberg enjoys being called “Notorious RBG.” “Most of it I think is very funny,” said Ginsberg on the meme. “There is a rap song, and there is one using the words from the Hobby Lobby dissent.  I haven’t seen anything that isn’t either pleasing or funny on the Web site. I think she has created a wonderful thing with Notorious R.B.G. I will admit I had to be told by my law clerks, what’s this Notorious, and they explained that to me, but the Web site is something I enjoy, all of my family do.”

That’s right: An 81-year-old Supreme Court justice thinks an Internet meme is not only funny, but eminently readable. It would appear that the justices don’t actually spend their time holed up in their chambers. (Except for Justice Scalia, who is obviously a robot.)

But behind the humor are important statistical trends. In the 2012 election, 50 percent of eligible youth voters cast a ballot, a nine point jump from 2000. In battleground states, that number jumped to 58 percent. That doesn’t sound like a politically unengaged demographic—even as more and more Millennials are identifying as independents, separating themselves from major parties and political groups, they’re remaining consistently involved and active in politics.

If anything, this sounds like a highly politically involved generation, even if the type and level of engagement looks different. Digital political culture is booming, and it’s something media are not taking seriously enough in their millennial hit pieces trashing this generation for being disconnected, disengaged, and apathetic. This is a generation that was raised on hope and confronted with dire circumstances (e.g. a war that won’t end, mounting student loan debt) and it’s still come back swinging.

Sure, the Millennial generation can be mocked for writing endless Change.org petitions, but that’s only a small component of what 18-33 year olds are doing on the political landscape. By creating an online fandom for politics, they’re generating an accessible conversation for fellow members of their generation who might be politically disengaged—they’re giving people a reason to get involved because politics can actually be fun.

People are liveblogging C-SPAN broadcasts and tuning in for streams of Wendy Davis filibustering in Texas. Sharp, insightful political commentary at publications like The Atlantic and The Nation is drawing Millennial readers and commenters; aggregators like BuzzFeed include politics as a matter of course, and they put them on the front page.

In a world where parody videos, snappy Twitter accounts, soundbites, and instantaneous media is king, millennials have found a way to create a framework for understanding and talking about politics. It’s not a way that would be necessarily recognizable to older generations, but does that make it invalid? More to the point, does that mean older generations are excluded? It would seem not, especially if the Notorious RBG can get down with it and judicial reporter Nina Totenberg can sing in a Lady Gaga parody. Smart, savvy members of older generations are meeting millennials in the middle.

One reason Organizing for America and the Obama campaign did so well is that they took to the Internet and took advantage of the huge millennial presence there. They brought the politics to their audience, and they worked with that audience to create a highly effective and compelling voter outreach campaign. Knowing that this generation is skewing liberal certainly didn’t hurt, but the decision to maintain a highly active web presence during the campaign certainly helped close the deal.

The Administration’s continued involvement with online society and memes is also incredibly savvy, from the First Lady’s Instagram to the President’s Twitter account (Michelle Obama’s Instagram is run by aides, @barackobama is run by OFA although he occasionally signs tweets). Hell, even the CIA is tweeting. We the People was the answer to Change.org, allowing people to directly petition the government. The level of engagement is so high that Paul Shawcross was forced to respond to a petition proposing that the U.S. build a Death Star by 2016—and he was a good sport about it, recognizing the value of the geek vote.

Much of the Millennial generation is lived out loud—this is a generation in love with social media, one that has embraced the Internet as a medium for sharing and exchanging ideas across a population growing in diversity even as it fractures along class faultlines. The shift from writing polite letters to legislators to producing a petition or starting a hashtag has been palpable, and important—and one method of communication isn’t superior to another.

While every generation has attempted to hold the government accountable, millennials have chosen a pervasive, viral approach that engages not just the government, but the rest of their generation. Every time people click on a political meme, sign a petition, or jump into a Twitter conversation, they’re engaging with politics and adding their voices to a larger social discussion. Politicians, and the government at large, pay attention to this.

Note, for example, the recent backpedal from the Obama Administration on sending children back at the border. After initially announcing that it planned to fast-track deportations of children, the Administration abruptly stated that it would respect the due process of child asylum-seekers. Was it a sudden burst of compassion? Unlikely. The real motivator was probably the online outcry, backed by solid opinion editorial, commentary, and, yes, memes, many of which came from millennial voters.

Never underestimate the power of a political meme.