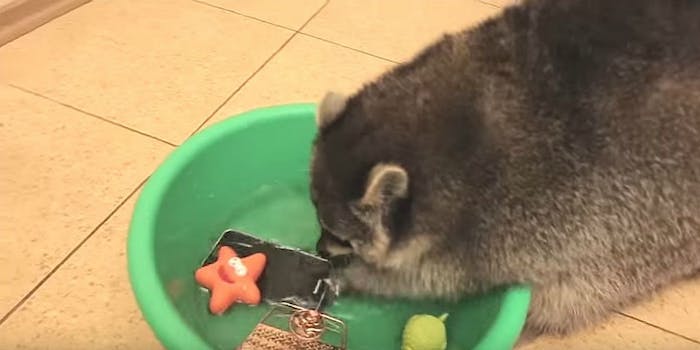 Pet raccoon washes things, including things that shouldn’t be washed

It's like the raccoon doesn't even care about destroying property.

Raccoons generally aren’t beloved by humans. They can carry rabies, they can be moody, and, as John Candy once discovered, they like to knock over garbage cans to explore the goodies inside.

But some people in Russia feel differently. They actually keep raccoons as pets, and some of them apparently put the animals to work, like this little guy who washes various items around the house.

Putting aside the humorous visual of a raccoon washing items in a water bowl in the same way that your great-grandparents once cleaned their clothes with a washboard, there might actually be a scientific explanation for this raccoon’s behavior.

“While their tendency to dip food in water may look like washing, raccoons identify objects by touch,” the Washington Post‘s Ann Cameron Siegal wrote. “One theory is that water increases the sensitivity of their paws, making such identification easier.”

Either way, the above video has generated a fair amount of cynicism. Did you see that phone early on? Some YouTube commenters are suspicious about it. They believe this was less of a video about the wonders of an object-washing raccoon and more of a stealth ad for Samsung positioned to surf the viral wave.

We can’t answer that question, but we can reiterate one key lesson: Don’t let your pet raccoon wash any of your possessions, because pretty soon they’ll start washing your smart phones and your leather shoes. We hesitate to stereotype, but they’re not the most level-headed of creatures.