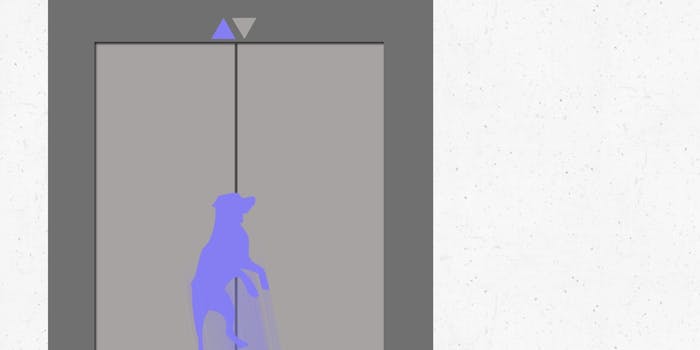 An elevator accident in Russia could have cost the dog its life.

A Russian dog has a new lease on life after a good samaritan saved it from certain death.

On Thursday a woman and her pug boarded an elevator in an unknown building in Perm, Russia, a city near the Ural Mountains. As the elevator door closed, the dog ran out, trapping it outside while the woman held its leash. The elevator rose and so did the dog. Luckily, an unidentified man was standing outside the elevator and grabbed the dog and its leash before it was injured.

“Can you imagine what the woman would have been thinking once the leash went loose?” wrote Reddit user usernametaken321 in a post featuring the above GIF captured from a security camera feed. “She probably spent the next couple minutes freaking out over her dog’s head being separated from its body.”

In the U.S., elevator accidents are very rare. American elevators make about 18 billion passenger trips a year resulting in only 27 deaths, the Los Angeles Times reported, citing statistics from the U.S. Bureau of Labor Statistics and the Consumer Product Safety Commission.

The GIF of the pug being saved was also the subject of a popular post on Reddit’s r/WTF where it collected more than 1,470 comments.