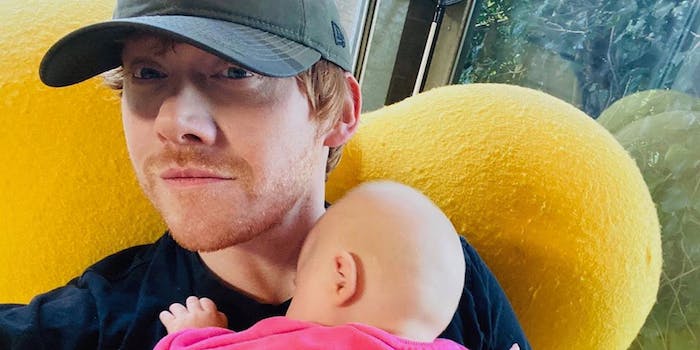 The photo has more than 2 million likes and counting.

Rupert Grint, like many of his Harry Potter co-stars, has largely avoided social media. But on Tuesday, he finally joined Instagram with a very relatable first photo.

The photo itself, which features a selfie of Rupert holding a baby, is indistinguishable from photos posted by your nonfamous millennial parent friends and family. But by posting the photo, Grint is also introducing the world to Wednesday, his daughter with actress Georgia Groome.

“Hey Instagram….only 10 years late, but here I am,” Grint wrote. “Grint on the Gram! Here to introduce you all to Wednesday G. Grint. Stay safe, Rupert.”

Since Grint posted the photo, it’s received more than 2 million likes as people are both welcoming Grint to Instagram and congratulating him on the recent birth of his daughter. Even some of Grint’s old Harry Potter co-stars got in on the fun as James Phelps (who played Ron Weasley’s older brother Fred in the films) replied with a simple “Nougat.”

On Twitter, there were a lot of reactions to the news. First, there’s the immense realization of time passing, both for Grint and for all of us.

Then some people focused on Grint’s daughter’s name, which was likely inspired by The Addams Family character.

There’s even a comparison to how doll-like his daughter looks.

And some people even got emotional after seeing that Grint’s profile photo is of Dame Maggie Smith kissing him on the cheek.

It’s too soon to know just how many more photos we’ll get from Grint, but it’s safe to say that with more than 2.3 million followers in just 24 hours, he’s already got a built-in audience to watch for every update.