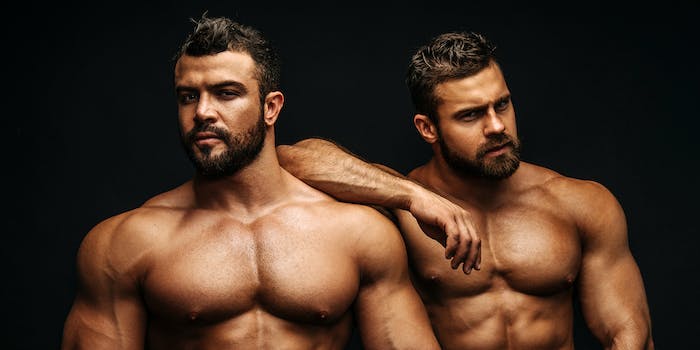 Author Romilly King has self-published more than 20 ebooks in the past year, a prolific output that earned a dedicated customer base on Amazon and Goodreads. Specializing in male/male erotica, King thrives in a market with extremely fast turnover. But according to some fanfic-reading internet sleuths, there’s an unpleasant explanation for this author’s unusually copious productivity: She’s plagiarizing some of her work from other people’s fanfiction.

Some fanfic writers “file the serial numbers off” their fanfiction by changing the character names and removing canon-specific details, allowing them to publish the same story as a commercial work like Fifty Shades of Grey. It was entirely plausible that Romilly King had actually written this Supernatural fic herself, and self-published it again as Paid to Kneel. But when Kokom Roily contacted the Supernatural writer in question, they’d never heard of Romilly King. King had seemingly copied entire sequences from this person’s fanfic and repackaged them as an original novel. The fanfic author filed a copyright complaint through Amazon, and Paid to Kneel was quickly taken down. The ebook is no longer available, although the audiobook is still on Audible.

Most fanfic is published on a non-commercial basis, avoiding takedowns from the source material’s copyright holder. But while you’re not allowed to make a profit from selling Supernatural fanfic, you do actually own the copyright to what you’ve written. If a fanfic writer is plagiarized by a commercial author, they’re well within their rights to issue a DMCA takedown. This is a relatively rare problem, but straightforward story theft (ie. reposting someone else’s fanfic under a different username) happens quite a lot, with non-commercial plagiarists essentially just doing it for the clout.

As Kokom Roily’s plagiarism accusation spread on Wednesday night, other readers began to look into Romilly King’s output, accusing the author of plagiarizing stories from other fandoms: Hannibal, Marvel, and the popular Chinese novel Mo Dao Zu Shi, to name a few.

These fandoms are full of long, sexually explicit male/male romances, many of which are AUs: Alternate Universe fanfics that bear minimal resemblance to the source material. They’re an ideal target for plagiarism, because they often rely on vague-but-familiar character archetypes that can easily be recycled in a different story. For instance, there are plenty of popular Supernatural fanfics about Dean Winchester (a macho, damaged guy from the wrong side of the tracks) and Castiel (a charmingly naive eccentric) where the characters are rewritten as mechanics, college professors or coffee shop workers, ignoring their canonical roles as a demon-hunter and a Biblical angel.