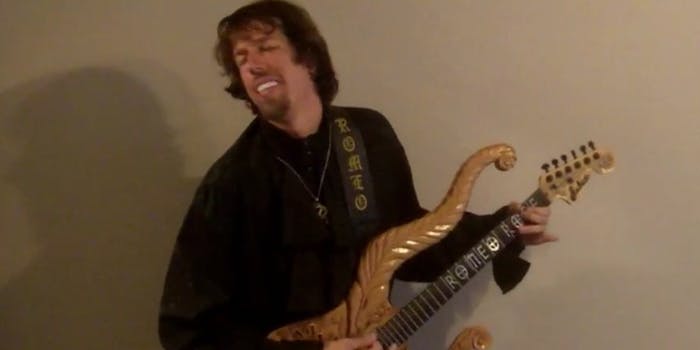 An Austin musician will give you $1,500 if you find him a girlfriend. Good luck. You're going to need it.

The search for love is hard, especially in a city like Austin. If you’re in the entertainment business, like musician Romeo Rose, it can be even more difficult to find a woman who’s ready to live that rock & roll lifestyle. Rose, real name Laramie Busby, recently created a website called Sleepless in Austin, where he explains what he’s looking for in a woman and offers $1,500 to whomever helps him find her.

He lists the basics: He’s 39, a Virgo, lives in South Austin. He’s looking for a woman between the ages of 21 and 41, but she can’t be more than 130 pounds and must be “white, Hispanic, or of European descent.” He offers another $1,000 if the relationship turns into marriage.

Here’s a little more about the woman he wants. Warning: Nothing on his website has been spell-checked or copyedited, in case that’s a dealbreaker:

“Being overweight is a total dealbreaker with me.

I prefer a woman that has never had children, because having kids does ruin a womans body often times. They end up with stretch marks. And also sometimes it makes their vagina looser, and I don’t care how many kegel exercises a woman does, after she has 2 or 3 eight to ten pound babies, you can’t tell me it’s going to be 100% as tight as it ever was!”

Elsewhere on Facebook, someone posted this thread on All or Nothing Tattoo, in which Busby’s appearance on Judge Judy is discussed, though the clip has, sadly, been changed to private. In a spectacular Reddit AMA yesterday, he claimed he was on the show suing for the removal of a tattoo of his ex-girlfriend. However, in his what-I’m-looking-for section, he says:

“To me, tattoos just represent white trash or somone that’s been in prison. I do not care for following trends like mindless sheep and getting tats just because what ever Star on TV got them, they will always be a symbol of White Trash.”

Now that he’s completely dissected the woman of his dreams, let’s get to know this charming man. First of all, ladies, you can’t live in East Austin. He associates it with “areas like around 12th & Chicon, that just looks like poverty striken, ghetto people crime infested neighborhoods, full of the trashy people that have long criminal records and lack any proper education.”

He also thinks 9/11 was an inside job, does not like Pres. Obama, and is a fan of Alex Jones. He boasts that he was banned from Antone’s, a legendary Austin blues club: “Stevie Ray Vaughan’s brother Jimmie Vaughan once banned me from ever coming into Antones, he refused to play if I was in the audience.”

Just browse his YouTube page for evidence that he considers himself a modern-day Stevie Ray Vaughan. He was the subject of a “douchebag alert” on the website MetalSucks back in 2009. According to Yelp, he’s also a wedding photographer. In another Facebook thread about Busby’s new search for love, one Austin woman explained her own interaction with him:

“He arrived on the Yelp Talk forum and posted a thread begging to meet girls (duh). For some reason, he became obsessed with me. After the APD detective called him and told him to stay away from me, he posted a YouTube vid in which he brandished a firearm, saying I caused him to buy it by filing the report.”

In the “FAQ” section, he claims he’s a man of his word and will not backtrack on the $1,500, but he explains chemistry must be established before money is exchanged. He says he’s tried dating sites, but those didn’t work:

“It is my firm belief that most women on dating sites are so unattractive they just don’t have many options in real life so they hide behind a screen. Or they just have too many issues. There’s usually a reason why a woman would look for a man on a dating site. It’s usually because she has tried to find a man in real life but couldn’t. This is usually due to her appearance, or to other issues. Many women on dating sites have mental issues and are very unstable, many do not even have a job.”

Since he left his number on the website, we called for comment. He’d just left an appearence on Austin radio station KLBJ.

“I’ve gotten some responses, but I’m kind of skeptical,” he told the Daily Dot. “It could be a practical joke. But you have to take risks in life. … I’m just getting out of an 11-year relationship, and every time I try to meet a girl, something bad happens. … I’m trying to think outside the box, you know?

“Money is the greatest motivator of all,” he continued. “But I’m a romantic, you know? That’s why I go by Romeo Rose.”

Update: The website has been taken down, but a cached version is available here.