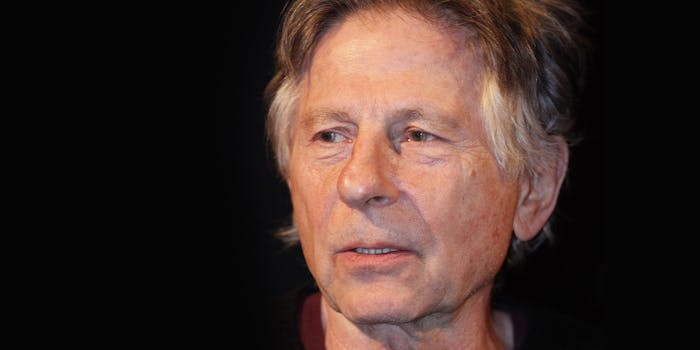 If Poland does the right thing, the long arm of the law might finally pluck Roman Polanski out of exile.

Roman Polanski is in the news yet again as Poland mulls an extradition request from the United States. It’s the sexual assault case that will not die, stretching over almost 40 years, countless attempts at dismissing the charges, scores of film industry supporters, and a loud conversation on the Internet that ensures Polanski’s name never stays out of the public eye for long. It’s time to bring Polanski back to the U.S. at last to face a court of justice, not least because the 81-year-old director won’t be around forever, and he needs to finally be held accountable for his crime.

In 1977, Polanski was charged with furnishing a controlled substance to a minor, perversion, sodomy, committing lewd and lascivious acts upon a child of under 14, and rape by use of drugs. He took a plea bargain for “unlawful sexual intercourse with a minor”—statutory rape—in exchange for having the other charges dropped. After being ordered to attend a court-ordered psychiatric evaluation and completing it, Polanski was asked to appear in court for final sentencing. But instead, he fled the United States for France, taking advantage of his protection from extradition, and he’s been hiding in Europe ever since.

Polanski has somehow ended up being cast as the victim here, living in “exile” in Europe in the undoubtedly harsh and miserable conditions of multiple homes, cradled by film industry elite.

This isn’t about whether the statute of limitations on the case has expired—he’s already pled out to avoid a trial and the question isn’t whether he committed the crime but why he failed to appear for formal sentencing, which likely would have included some jail time followed by expulsion from the United States. Polanski has somehow ended up being cast as the victim here, living in “exile” in Europe in the undoubtedly harsh and miserable conditions of multiple homes, cradled by film industry elite—the filmmaker has continued to make movies, win awards, and make the industry circuit.

Polanski has made some of the most beautiful, and influential, films of our time. Rosemary’s Baby (1968) remains an enduring classic, as does Chinatown (1974). Just two years after he raped Samantha Geimer, he directed Tess, for which he won the Academy Award for Best Director. The Pianist (2002), 2003 Best Picture winner, and Venus in Fur (2013) have both been internationally acclaimed in the U.S. and abroad. His artistic talent isn’t in dispute, but it’s possible for a great artist to do terrible things, and by all accounts, that’s what he did to Geimer; testimony from the case indicates that the terrified 13-year-old begged him to stop as he committed multiple sex acts against her will, an activity that is generally known as “rape” in the public discourse, though the legal system may call it “unlawful sexual intercourse.”

His supporters from around the world include a disturbingly long list of well-known figures like Tilda Swinton, Woody Allen, David Lynch, Salman Rushdie, and Martin Scorsese, who treat him like a persecuted hero instead of the rapist he is.

But being talented and producing incredible works of art doesn’t exclude you from accountability for your crimes. Polanski accepted a plea deal, admitting to his crimes in exchange for a lesser sentence, and he needs to face up to sentencing. His decision not to has been supported and facilitated around the world not just by national governments but by heavyweights in the industry, especially in Europe, where many French dismiss the case for extradition, and the Polish have embraced him as a cultural icon. His supporters from around the world include a disturbingly long list of well-known figures like Tilda Swinton, Woody Allen, David Lynch, Salman Rushdie, and Martin Scorsese, who treat him like a persecuted hero instead of the rapist he is.

Polanski has filed a series of requests for dismissal, including in 2008, 2009, and just last year. Every time, the Internet has been ready with opinion pieces and commentary to remind the world that Roman Polanski committed a horrific crime for which he hasn’t been sentenced, which may play a role in how the court has ruled consistently against Polanski. Each request has been denied, with the judge mandating that Polanski appear in court, something he refuses to do for fear of facing penalties at last.

Meanwhile, the U.S. has filed multiple requests for extradition—he was briefly detained in Zurich in 2009-2010, and now, Polish investigators have referred their findings on the latest request to court for review. Should the court determine that the request be granted, the Justice Minister will need to approve it, and Polanski could be sent back to the United States at last, in what would be a monumental moment for American justice.

Notably, the punishment he faces would likely be relatively light. He would be obliged to finish out a 90-day sentence that was almost halfway over, and then asked to leave the country. The Interpol warrant for his failure to appear would be dropped, allowing him to move freely through every country in the world except the United States. It’s possible he could be dinged on contempt of court for failing to appear for nearly 40 years, but given his age and high profile, it’s probable that this punishment wouldn’t be significant.

“His chances of getting off with a slap on the wrist are good, especially with Geimer’s forgiveness,” wrote Julian Sancton at Vanity Fair when he filed for dismissal in 2009. His victim has made it clear after an earlier suit and settlement over the case that she has forgiven Polanski and thinks the matter should simply be dropped, and this would carry significant weight in court. For Polanski, the court appearance would be a minor matter.

“The criminal justice system doesn’t traffic in healing or forgiveness… It has one purpose, which is to ensure that those who break laws, no matter who they are, will be held accountable and face the court-mandated consequences.”

Yet, as Sady Doyle noted in 2009 at the Guardian in a discussion of his case, “the criminal justice system doesn’t traffic in healing or forgiveness.” Doyle wrote, “It has one purpose, which is to ensure that those who break laws, no matter who they are, will be held accountable and face the court-mandated consequences.” It doesn’t matter if Polanski is beloved by the film industry, if he has contributed to the cultural history of the West, if his victim has forgiven him—what matters is that he appear in court to accept his sentence.

Polanski’s arrogant response to the investigation and threat of extradition was simply denial: “I believe that this will not take place. I have confidence in Poland’s justice system.” Meanwhile, the United States is struggling to rectify a miscarriage of justice that has been stretching on for decades. Polanski and his supporters seem to believe that he’s being persecuted by dogged district attorneys and judges who have refused to let the case rest and that the Polish government will protect him from such a gross violation, but perhaps they’re wrong. Perhaps the Polish justice system will do the right thing, even at the cost of losing their hero.

Polanski, and others like him, believe that they’re untouchable because of their extremely high profile and number of supporters—and the insistence that they’ve somehow done their time. At the same time that his supporters demand dismissal of his case, they’ve also done their fair share of slut-shaming, painting Geimer as a 13-year-old vixen—who might not even have been a virgin, as though this was somehow relevant to whether she was, as Whoopi Goldberg infamously put it, “rape-raped.” The simultaneous attempt to make Polanski look like a victim and make his victim look like a fame-hungry seductress is craven and terrible, but it’s worked so far.

At the Guardian, Catherine Bennett points out the bizarre double standard when it comes to who is condemned in cases like this and how high the cost of that condemnation can be. Bennett writes, “[I]f a serious sex conviction should cost a footballer his entire career (along with the professions routinely closed to sex offenders) then a similar vigilance should, surely, be applied to discernible sleazebaggery in any other profession, from whistleblowing to royal work, where clemency might be mistaken for approval.”

Despite claims that Polanski has paid a high price for his crimes, he hasn’t. He hasn’t been restricted from working in the film industry, he’s allowed to work with children, he’s been the toast of artists across Europe and the United States, and he’s been celebrated as an influential auteur. Polanski most certainly hasn’t paid the price—and it’s time to hold him accountable at last.

Sadly, that may never happen—Polanski’s clout could keep him insulated from the justice meted out to mere mortals, just as it has all these years.