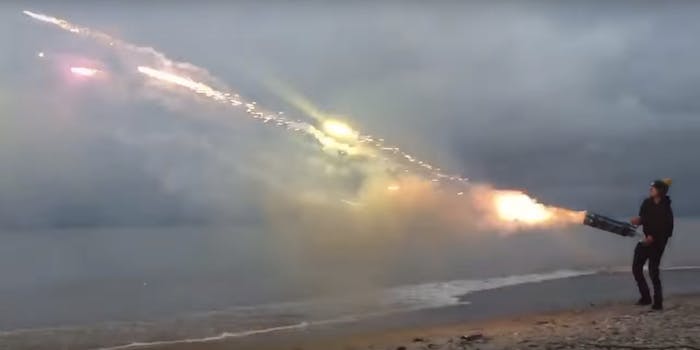 Dudes with a Roman candle minigun shoot 1,001 fireworks into the sky in 45 seconds

It's so dazzlingly pretty.

In the video, one dude points the firework-filled minigun toward a body of water after his friend lights them up, resulting in a rapid-fire burst of explosions. Sure, the minigun doesn’t spin, but it’s still a sight to see, especially considering how many Roman candles this contraption shoots in under a minute.

According to the video’s uploader, the fireworks cost $110, while the PVC, glue, and tape cost around $30. But being able to pop off so many fireworks and possibly freak out your neighborhoods while feeling like a total badass? Priceless. (Even though some of the commenters have been calling out the guys for polluting the water with their activity. But hey, haters gonna hate.)