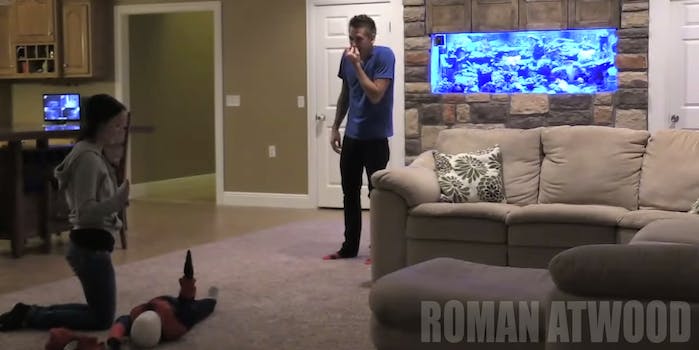 This prankster made his wife think he killed his own son

Don't try this one at home—ever.

Apparently nothing is off-limits when it comes to a prank anymore.

Roman Atwood, who’s helped terrorize a town with Jason Vorhees, fake a cheating scandal, and sneeze off women’s dresses in the past year or so, is now involving his two young sons when it comes to tastelessly pranking his wife, Brittney. They both hid quietly in the closet while Atwood threw a dummy dressed up in a Spider-Man costume over the balcony.

It went over about as well you’d imagine, and the reveal isn’t enough to curb her anger. Just don’t do it.

“You don’t pretend to throw our kids off a fucking balcony,” she shouted.