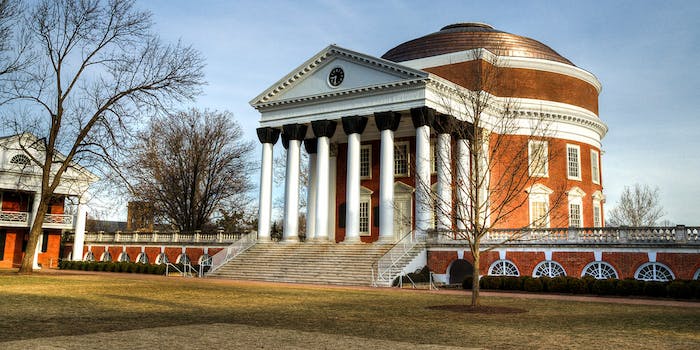 Rolling Stone today issued a statement, or rather a “note” to its readers, responding to a story published in last month’s issue. Sabrina Rubin Erdely’s “A Rape on Campus” reported on the alleged September 2012 gang rape of a woman named Jackie (not her real name) at a Phi Kappa Psi frat house party at the University of Virginia.

Managing Editor Will Dana now admits there were “discrepancies” in the story. He said, in part:

After the story was published, many people wondered why Erdely never questioned the men accused. Rolling Stone alleges that Jackie asked Erdely not to contact the men accused of the assault at her request:

Because of the sensitive nature of Jackie’s story, we decided to honor her request not to contact the man she claimed orchestrated the attack on her nor any of the men she claimed participated in the attack for fear of retaliation against her.

This is a common fear for rape survivors, especially on college campuses. But Rolling Stone’s “apology” also not-so-subtly discredits the victim and casts doubt on her story on a very public stage, which is not good for changing the slowly evolving discourse on believing rape survivors. Calling the story a hoax is even worse, even if details of the story are inconsistent.

What might have helped this story’s outline become a little clearer is if the reader had known, before this apology, that Erdely had decided not to contact the accusers by the victim’s request. The “discrepancies” should also have been reported on in the actual story.

Seriously, @RollingStone. If there are "discrepancies," report on them. Don't post an ed's note that enables writing the whole story off.

Shorter Rolling Stone note: We misreported Jackie's story. We published it without checking it. We blame her for telling it to us.

Just a reminder that UVA was under a strict federal review of its sexual assault practices before the Rolling Stone piece ever came out.

The Washington Post reports that the lawyer for the UVA fraternity is set to release a statement claiming that Phi Kappa Psi did not hold a party on the night in question. The Post also interviewed a friend of Jackie’s, Alex Pinkleton, “who survived a rape and an attempted rape during her first two years on campus,” and who had subsequent conversations with the victim and “now feels misled.” However, she points out, “One of my biggest fears with these inconsistencies emerging is that people will be unwilling to believe survivors in the future.”

While the details of this one case may have been misreported, this does not erase the somber truth this article brought to light: Rape is far more prevalent than we realize and it is often misunderstood and mishandled by peers, institutions, and society at large.

Phi Kappa Psi has also issued a statement, reiterating that it did not hold an event on the night in question. 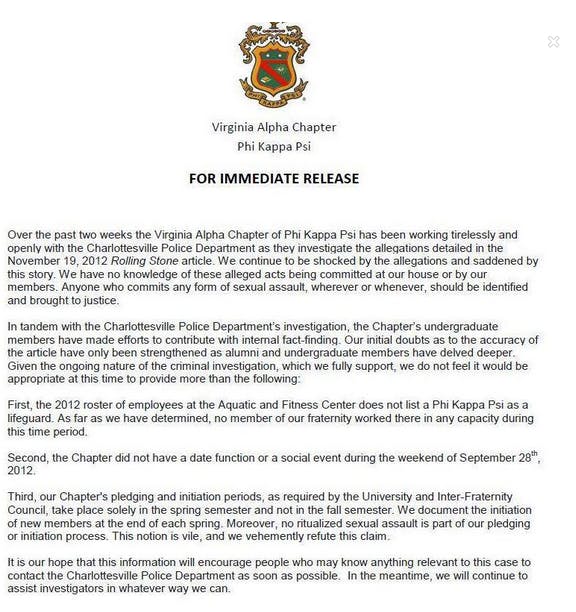 Jackie has also retained a lawyer but is not commenting on the story right now.

Update, 4:15pm: Rolling Stone managing editor Will Dana has responded to criticisms of the publication’s apology on Twitter:

1/I can’t explain the discrepancies between Jackie’s account and the counter statements made by Phi Psi.

2/The fact that there is a story that appears in Rolling Stone in which I don’t have complete confidence is deeply unsettling to me.

3/We made a judgment – the kind of judgement reporters and editors make every day. And in this case, our judgement was wrong.

4/ We should have either not made this agreement with Jackie…

5/…or worked harder to convince her that the truth would have been better served by getting the other side of the story.