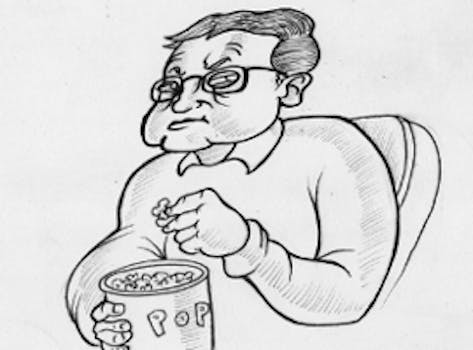 "Fandom was a secret society and I had admission to friends everywhere who spoke the same arcane language," he wrote in 2004.

It’s no secret that Roger Ebert was a fan of movies. He loved movies passionately and sometimes despite themselves—like when he gave Speed 2: Cruise Control, a movie with a 2% tomato meter rating, a three star review because of its passionate commitment to “goofiness.”

But what most people don’t know is that he was also in fandom. Ebert began his career as a teenager in sci-fi fandom, writing passionate letters to fanzines and eventually writing for the fanzines himself.

But he didn’t just write. In a missive for sci-fi magazine Asimov’s, published in 2004, Ebert recalls how “Fandom was a secret society and I had admission to friends everywhere who spoke the same arcane language.”

In it, he reveals that he wasn’t just a geek: he was a hardcore supergeek. He formed the Urbana High School Science Fiction Club and went to the University of Illinois campus to geek out over sci-fi legends like Arthur C. Clarke and John W. Campbell. He spent time at midwest sci-fi cons and had gleeful meetups with other fans, describing how he “nearly [skidded] off a road in Indiana, talking all the way about fandom in a giddy rapid-fire exchange of inside jargon.”

And, of course, he collected the stories. “I must have read nearly every s-f magazine and paperback published over a period of three or four years,” he wrote in 1969.

“I have hundreds of mags in a closet even now, all with a little sticker on the inside cover that says Roger Ebert’s Science Fiction Collection.”

To the fans who still struggle with being considered marginalized freaks and socially awkward nerds; to the fans who worry that their fan-related interests will be misunderstood by outsiders: Ebert knew you all.  “No one who did not grow up in the fifties will be quite able to understand how subversive fandom seemed,” he wrote.

Fanzines were not offensive in any way–certainly not in a sexual way, which would have been the worst way of all in a family living in the American Catholicism of the 1950s, but I sensed somehow that they were . . . dangerous. Dangerous, because untamed, unofficial, unlicensed.

Although he may have been wrong about video games, he was usually right about fandom. He kept in touch with fans and fan concerns—like when he gave shout-out to the hordes of Avatar fans outraged by the movie casting in his review of The Last Airbender.

And while many writers are grappling with the impact of fandom and fanfiction on their work, Ebert, who had been and remained a member of fandom at its core, grasped immediately that fanwork was one of the highest compliments a creator could receive. “Reading and writing fan fiction is an order of magnitude above simply being a fan,” he calmly told a commenter on his blog in 2010. Fandom, he claimed, helped open his mind, expose him to great films and great thinkers, and ultimately shaped his own critical voice–as it has done for so many fans since.

Perhaps this fandom tie is why this greatest of critics was so often willing to kick back and let movies work their magic upon him—why he forever championed the 1998 sci-fi/fantasy underdog Dark City over its fellow late 90’s dystopia The Matrix; and why he gave the reviled creature feature Anaconda three and a half stars. You can hear the echo of the teenage boy who collected Xero and Asimov’s giggling as he writes, “I sensed with a deep certainty that before the movie was over, I would see an anaconda regurgitate its prey.”  He knew that at the core of all the pretense around reviewing—which he once called “a matter of subjective opinion”—was a film’s basic ability to inspire fanboy and fangirl glee.

And Ebert, in turn, did well by fandom. EbertFest, the annual film festival he held, has sold out fast each year. It will be a powerful memorial to Ebert’s memory when it takes place in two weeks.

He also found his way into fanart and fanfiction—like this image of Ebert as a My Little Pony, and this tiny but loving cameo from “Dipping Graham: A Love Story,” in which Bruce Campbell’s character in My Name is Bruce has a metaphysical encounter with Ebert:

In Chicago, they meet Roger Ebert at a screening (he gives Cavealien 5 a star and a half which, Bruce notes, is a half-star more than he got for The Evil Dead). The old critical lion smiles and pats Bruce’s hand when he comes up to greet him, and swiftly types a sentence into his iMac. “You know the words, Bruce,” the mechanical voice says. “Some day, you’ll learn the music.”

Thanks, Roger, for teaching the music of fandom to all of us.