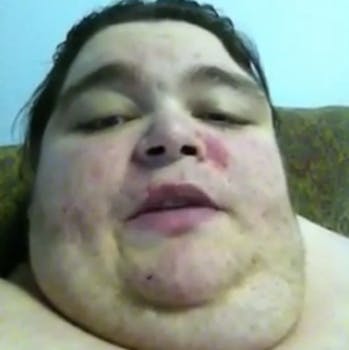 It’s been three weeks since Robert Gibbs turned to YouTube for help in dealing with his obesity, and got way more than he expected—including an offer of help from TV personality Dr. Phil.

Gibbs returned to YouTube on March 25 to thank everyone. But users of the social news site Reddit, who played a role in getting attention for his original plea, are now demanding an update: Has Gibbs lost weight yet or what?

Redditors can pretty much make anyone Internet famous. But the site’s hive mind is quick to turn sour on Reddit-propelled Internet celebrities if they don’t seem to be living up to their potential

On Monday, Gibbs’s four-minute video update made the site’s front page, but the comments have a markedly different tone than the last time his story hit Reddit.

Besides thanking his fans, Gibbs mentioned his upcoming Dr. Phil segment and his mention on Jimmy Kimmel, before telling viewers, “If you need help, ask for it.” Absent from his video? Any mention of weight loss, dieting, or exercise.

Many redditors, citing their own personal experience with weight loss and obesity, mentioned the pounds should “fall right off” in the beginning if he were dieting, or exercising even as little as a 20-minute daily walk. (Of course, even that’s a ways off for someone in Gibbs’s condition.) Some plugged the weightloss subreddit r/loseit.

“Hurr durr I want weight loss to be given to me on a silver platter by other people instead of putting in hard work or the brain effort to not fucking eat like a fatass everyday of my﻿ life up until now,” wrote mmmcigarette on YouTube. (“Hurr durr” is a common, if rude, impression of someone inarticulate.)

Other Internet citizens were less callous.

“Hey﻿ you have all of reddit behind you, you should feel pretty happy because we usually only do that for cats,” wrote HatersGonnaHate6 on YouTube, in a top comment.

And some offered to take concrete action to help Gibbs.

“Apparently I live in the same town as this guy,” wrote boxoffun. “I’m overweight myself and been gymming it up lately, with some marginal success. I’d be happy to go hang out with this dude, just cause … you know, I have the feeling he’s crazy depressed. But I’m pretty social and I have the feeling we can find some common ground to connect humanity, or whatever. Does anyone have any immediate contact info?”