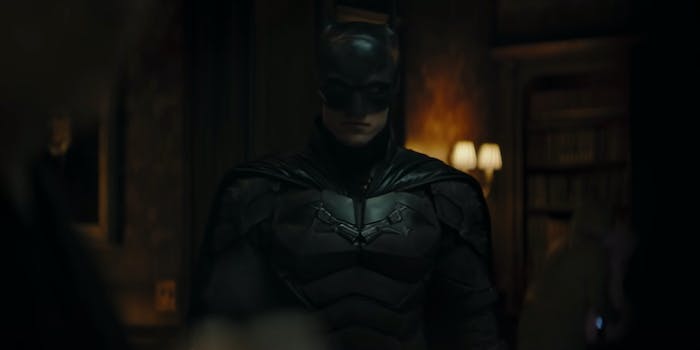 Batman in a robe has never been more relatable

Yes, the Caped Crusader is in loungewear.

The Batman is still in the midst of filming, but it’s already given us one thing that none of the other live-action Batman films have: Batman (and not Bruce Wayne) in a robe.

The Caped Crusader and his loungewear appeared on the Liverpool set of The Batman, which resumed shooting after a positive case of COVID-19 led to production being shut down. Paparazzi photos of that shoot show someone wearing Batman’s suit riding a motorcycle and standing around in-between shots. It doesn’t appear to be Robert Pattinson himself but rather a stunt double.

For the most part, these are the kinds of photos that you’d expect to come from an outdoor shoot: There is a little bit of action and a lot of standing around. But in many of the photos, the person donning the bat suit is wearing a big and thick black robe.

Is there something about this particular Batman—and why he’s wearing a robe—that we don’t know? Probably not. It’s far more likely that the robe is something for the performer to wear in-between takes if it’s chilly and the bat suit isn’t suited for cooler weather. But context matters not when there’s a new Batman photo to inspire memes.

Someone quickly sparked a contest in r/photoshopbattles in which redditors tried to outdo their remixes on robed Batman. On Twitter, the puns and riffing flowed freely.

Visually, Pattinson’s stunt double wearing the bat suit and a robe brings to mind Lego Batman, who pulled a similar move in The Lego Batman Movie. The Batman might be yet another movie that delves into the psyche of someone who’s traumatized by his past and turns to vigilanteism to turn Gotham City around, something that might both interest and turn away fans depend on what they want from The Batman. But for a brief moment, as Pattinson’s stunt double stood in a robe that wouldn’t appear in the movie and he was only wearing for practical reasons (and operates as a blank canvas that allows us to put our own feelings onto it), he’s never been more relatable.