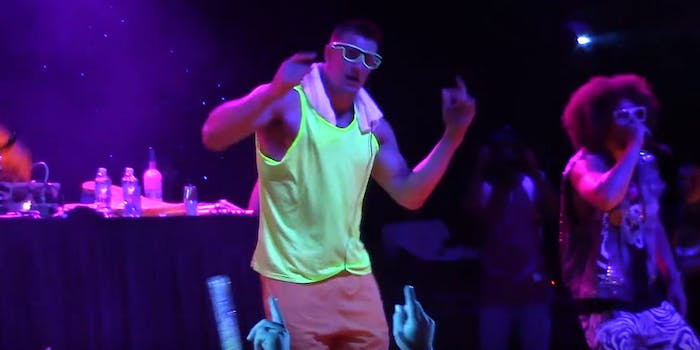 Things could not have been any more Gronk.

We already know Patriots tight end Rob Gronkowski is probably the bro-iest bro of anybody who plays in the NFL. And after his Gronk party cruise docked in Miami on Monday, the social media moments emanating from the three days in the Caribbean were soon released en masse.

Not surprisingly, they’re filled with debauchery. And dancing, drinking, decadence, and damage (to your reputation). Interestingly, one couple got engaged on the ship, but otherwise, it was a carnival of gratification and Gronkitude. Luckily, social media was there to give us insight into the bro-iest boat ride ever to ride the high seas.

One woman thought she could tempt Gronkowski with this offer: “I would do butt stuff.”

Not everybody, though, was there to be entranced by (or to seduce) the NFL’s best tight end. Said one woman: “I’m not a fan of Gronk. I’m not a fan of the Patriots. I’m just a fan of drinking.”

The Boston Globe had a fun rundown of the cruise, including talking to a woman who identified herself only as “There’s absolutely no way I’m telling you my name” who said, “Am I having a good time? Oh my God, yes! Although I kind of don’t remember last night. I might have blacked out.”

At 3:30 a.m. on the #GRONKSPARTYSHIP, this woman is officially my spirit animal. pic.twitter.com/D03EiWBwF4

These 4 girls asked Rob if he thought he could bench them all at once. #clownquestion #teamjb pic.twitter.com/kmljtjMnou

But here’s the most amazing thing we learned from the Gronk cruise. Not that people had loud sex on top of other non-participating people in their cabin, not that drugs were ingested nor that people got wasted. All of that was to be expected. But here’s what we didn’t know.

Gronkowski believes in his intelligence.

He's misunderstood! "I'm not stupid," says @RobGronkowski during a Q&A with fans on #GRONKSPARTYSHIP @BostonGlobe pic.twitter.com/WSPeqdywyV