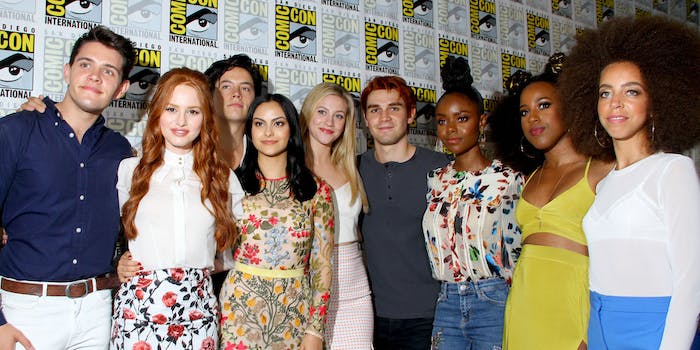 The memes suggest nobody is more thrilled about 'Riverdale' ending than the 'Riverdale' cast.

The long-running series Riverdale—the Fast and Furious of television—is coming to an end after seven seasons, the CW announced on Thursday ahead of the network’s Upfronts presentation to advertisers. And while fans certainly have mixed feelings about it, they’re also turning the cast’s potential reaction to the news into a meme.

Riverdale, a teen drama based around the characters of Archie Comics, had recently been renewed for season 7 amid a bloodbath of CW cancellations that some attributed to factors such as WarnerMedia’s impending merger with Discovery and the CW being up for sale. While Riverdale was one of the few to make it out of that initial cancellation day unscathed, Riverdale’s episode order for its final season won’t be shortened, according to CW Network chairman and CEO Mark Pedowitz.

“I am a great believer in attempting to give series that have long legs an appropriate send-off,” Pedowitz told Decider. “We had a long conversation with [showrunner] Roberto [Aguirre-Sacasa] yesterday, who’s thrilled by this news, and we are really going to treat this show in the manner it deserves. It is an iconic pop culture star, and we want to make sure it goes out the right way, that is the decision. I think they, too, found seven years is the right amount, and we want to do the right thing. Again, that’s a personal thing, as a fan myself, I want to do what’s right for the shows.”

For some fans, it’s a day that seemed like it would never happen even as dozens of other shows across television faced the cancellation ax from their respective networks (including the CW).

While Riverdale always had a passionate fanbase behind it, it’s also something of a perennial internet punching bag because of its many, many absurdities over the years. It’s a show that, early on, went viral for Jughead’s memeable speech about how weird he is and Archie going to jail and telling a fellow prisoner that he hasn’t “known the triumphs and defeats, the epic highs and lows of high school football.”

But some of the plotlines have become so outlandish that “Archie and Betty have superpowers now” is something that actually happened and one person even joked last week that “The CW is cancelling all their other shows to have the money to send the riverdale cast to space in season 7.”

Somehow, the show survived longer than anyone thought possible.

But no matter how the fans might feel about the show ending, perhaps nobody may be more thrilled about the end of Riverdale than the cast of Riverdale. Some people went as far as to use moments of jubilation to illustrate their point.

While the depiction of glee is somewhat amusing to see appear, it’s a reference to the fact that the cast of Riverdale didn’t seem to like Riverdale all that much. The cast has criticized the direction it’s gone in, certain creative choices, how the show treats its Black characters, and the show’s fans. In a recent GQ profile, Cole Sprouse said that while he’s grateful for the show, most of the actors want to “wrap it up with a bow” and spoke about the backlash he faced from Riverdale fans after his breakup with co-star Lili Reinhart.

“I felt so free coming from a show where I feel like I”m in jail a lot of the time,” K.J. Apa told Demi Moore for Interview magazine about his role in the movie Songbird. “There are so many restrictions on what I can and can’t do. With this character, it was like, “Wow, this is what it’s like to really express myself in a natural way.” I wasn’t covered in makeup or hair products. I had long hair and a beard. I just felt free.”

The cast members have spoken critically so often about Riverdale that there’s a two-year-old supercut of their comments that’s been viewed nearly 4 million times.

And even when acknowledging the end, Apa found a way to mention one of the benefits of no longer being obligated to make more Riverdale.

“I can’t say I’d miss dying my hair every week, I’m looking forward to being myself again, but I promise you guys, this last season, we are going to end it with a bang, and we can’t wait to share it with you,” Apa said at the CW’s Upfronts.